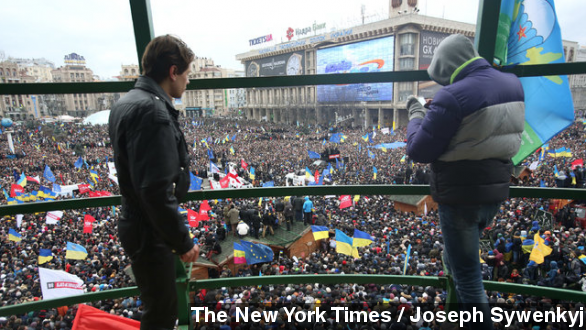 The protesters say they'll come to the negotiating table only if President Viktor Yanukovych fires his current government and names a new one.

Protesters in Ukraine have issued a final ultimatum to their president.

"This is up to the president and within his powers to sign an executive order and to dismiss the government." (Via Voice of America)

That's the leader of Ukraine's opposition movement. He says they'll come to the negotiating table only if President Viktor Yanukovych fires his current government and names a new one committed to closer ties with Europe. (Via YouTube / yanukovychvf)

Their demands come after three weeks of protests throughout Ukraine. They were triggered in part by Yanukovych's surprise decision to ditch what would have been a series of historic trade agreements with the E.U. (Via Channel 4)

He blamed pressure from the country's biggest foreign investor, Russia.

His Russian counterpart, Vladimir Putin, had reportedly threatened sanctions and higher import duties if Ukraine went ahead with the E.U. deal. (Via Euronews)

Then on Friday, Yanukovich paid a visit to Putin in Sochi — a move that only further angered the opposition and raised speculation the two countries are closer to signing a customs union meant to rival the European Union.  (Via Kyiv Post)

Hundreds of thousands have returned to the streets Sunday in what will likely be the biggest anti-government demonstrations since the country's Orange Revolution nine years ago. (Via BBC)

​The foreign-policy director at the Centre for European Reform in London told Businessweek, "The opposition probably hopes that a massive turnout will unnerve the authorities, forcing them to capitulate or offer major concessions."

Opposition lawmakers tried getting rid of the current government with a vote of no-confidence last week, but they lacked enough votes.