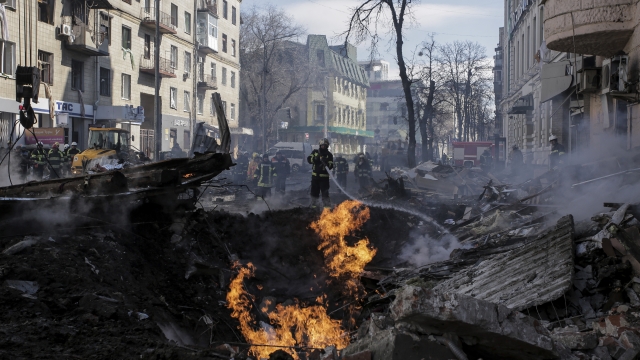 Nataliya Zubar, who lives in Kharkiv, is collecting visual evidence of Russia's attacks in Ukraine and storing it in the cloud for protection.

Nataliya Zubar is the voice from behind a camera recording a video of a destroyed university building in Kharkiv, Ukraine.

She called out details: Broken glass that reached the square across the street, the building's interior becoming its exterior.

"You can imagine how big the shockwave was," Zubar says. "The people are dying. The apartment buildings are being destroyed."

And some of her footage is evidence collected and stored to the cloud for protection. She says she hopes it can eventually be used in war crimes trials.

"This is the place where [a] bomb was thrown from the plane. And now, I will show you the results of this bombing," Zubar continued. "We are trying to do, myself personally, are trying to document the war crimes."

Zubar lives in Kharkiv, which is one of the cities where volunteers for The Maidan Center — a Ukrainian human rights group — have chosen to stay, taking enormous risks to bear witness to what's happening all around them as they try to hold firm in cities being rocked to the ground.

Where Russian shells crack open residential high rises, where shopping centers are leveled to the ground, where, experts say, there are no military targets — just civilians.

"Irreversible damages to 400 buildings, already big buildings. And we are speaking about the buildings where 5,100 peoples lives," Zubar said.

Intentionally killing civilians is a war crime. Proving intentionality is no simple matter, though. The documentation is best recorded while the alleged crime scenes are fresh, while the rockets and mortars are still dropping.

NEWSY'S JASON BELLINI: That sounds like dangerous work you're doing.

BELLINI: Have you had any close encounters with Russian weapons?

ZUBAR: There was a rocket 200 meters away from me.

She says her group consulted with a Polish institute that documented crimes against humanity in the second World War.

ZUBAR: If we document it gradually, day by day, Russia will not be able to get out with it. They couldn't deny the crimes.

BELLINI: Well you know as well as I do, they will deny.

ZUBAR: Well, they can actually say anything. But if we develop a methodology for gradually documenting the events as they appear today, tomorrow, the day after tomorrow, we may be able to actually have a very solid evidence base.

Before the Russian invasion, Zubar worked in information technology. What she's doing now involves both information that she herself seeks on the ground and technology to make sure, that no matter what happens to her, even the record is invaluable.

ZUBAR: Even if we are dead, all the digital evidence will be supported.

BELLINI: The Russian soldier who fires those mortars, who fired those rockets — do you think no matter how much evidence you collect, he'll ever pay a price for that, or the person who commanded that soldier?

ZUBAR: Yeah, I believe they do. Our military have reported that they caught a pilot of a bomber, who was bombing in a city near Kharkiv.

BELLINI: Why would they kill civilians purposefully?

BELLINI: Do you think they're evil?

ZUBAR: I don't know. Well, I am not an expert in the religion, and so, you know, evil is not a criminal category.

BELLINI: There are people who might be watching this and saying, that's great what you're doing, but you should get out of there.

ZUBAR: I was offered an opportunity to get out many times. I have lots of friends in different countries. I could go safely to many countries. But it's my mission. I was prepared for it.

A mission, a calling to hold those destroying lives and the world around her accountable.