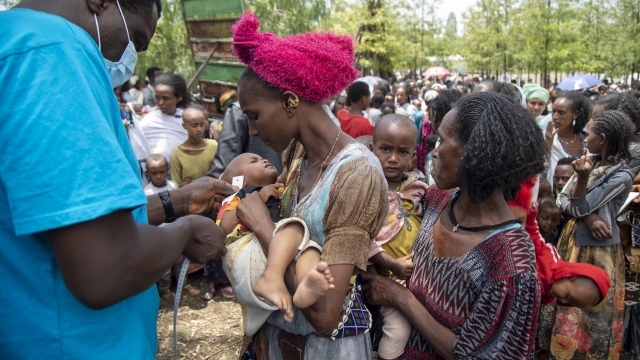 The world's worst hunger crisis is unfolding and the U.S. says up to 900,000 people now face famine conditions in the war-torn region.

More than 100,000 children in Ethiopia's embattled Tigray region could face the most extreme and life-threatening form of malnutrition in the next year, the United Nations children’s agency warned on Friday, as humanitarian aid remains blocked from the region of some 6 million people.

The U.N. estimate, a tenfold increase over the usual caseload in Tigray, is based on “essentially the scenario we’re seeing now, in which the conflict escalates and food access is restricted,” Marixie Mercado with UNICEF’s emergency response team said.

The warning comes as high-level officials from the U.N. and United States visit Ethiopia over the next several days to press the government to lift what the U.S. has described as a “siege” of Tigray and as some 200 food-laden U.N. trucks are stuck on the only remaining road into the region.

Millions of civilians in hard-to-reach Tigray areas, in northern Ethiopia, are at risk of malnutrition and illness.

The world’s worst hunger crisis in a decade is unfolding in Tigray, where the U.S. says up to 900,000 people now face famine conditions and international food security experts say the crucial planting season “has largely been missed” because of the war.

UNICEF also said screening data shows that 47% of all pregnant and breastfeeding women in Tigray are acutely malnourished, meaning more risk to both mothers and children.