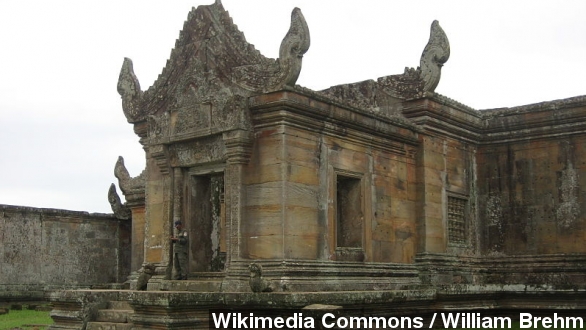 The UN has awarded Cambodia sovereignty over most of the land around the ancient temple Preah Vihear.

It's been the source of half a century of tension between Thailand and Cambodia.

But the UN's highest court has just awarded Cambodia sovereignty over most of the land around the ancient Hindu temple Preah Vihear. (Via Wikimedia Commons / William Brehm)

In the past, both Cambodia and Thailand have laid claim to the temple, leading to violent clashes between the two sides. (Via Khmer TV )

Here's the rub: The 11th century marvel sits on Cambodian land, but one of its entrances is on the Thai side of the border. (Images via Wikimedia Commons)

And we should add — the same court had already awarded the temple to Cambodia back in 1962. Thailand disputed the ruling — in particular, a 1.8 square mile area around the temple. (Via CNN)

But even before the International Court of Justice's ruling in favor of Cambodia, hopes were high in the international press that both sides would accept a decision either way. The BBC reported from the Cambodian perspective, talking to the Cambodian general in charge of defending the area.

"We've already agreed to contact our Thai counterparts every hour to sort out any misunderstandings, and Prime Minister Hun Sen has has made clear the Cambodians will not launch any attacks against Thailand."

But contrast that with Al Jazeera's Scott Heidler's report, which focused on the Thai side of the border, and didn't paint as peaceful a picture before the ruling.

"The Thai government is already on edge with thousands of opposition protesters on the streets. If the ruling goes its favor the opposition can use it to their advantage. I think it will be a big crisis." ​

In fact an opposition nationalist group told Thailand's The Nation IF the Thai government readily ceded territory, it "...could be deemed as 'selling the nation' to foreigners."

And in any case, according to the Bangkok Post, Thailand is likely to challenge other disputed areas around the temple left unresolved by the court's latest ruling.