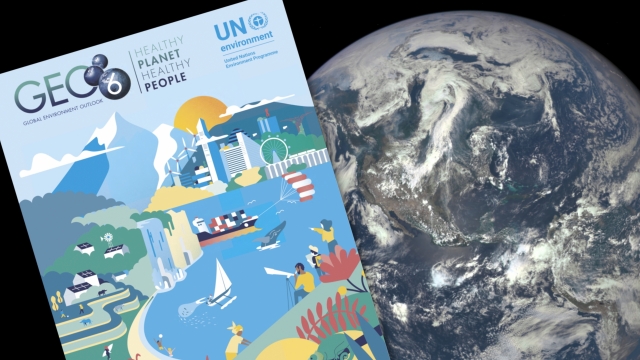 The UN's Global Environment Outlooks paints a pretty grim picture of the Earth if society doesn't do more to slow down climate change.

A new environmental report from the United Nations paints a pretty grim picture of the planet's future.

Over 250 scientists worked for years to put together the sixth Global Environmental Outlook. The report looks at the state of the world through five different categories — water, land, oceans, biodiversity and air — and projects what might happen in the coming decades.

The impacts of climate change are mentioned all throughout the report, as the warming planet impacts many aspects of every day life. But not all the concerns and recommendations focus solely on climate change.

One area of concern highlighted is the world's food supply. The report says about one-third of the food produced around the world every year is wasted. By 2050, there could be 10 billion people on the planet, and the report said, if we don't make changes to our global food supply chain, agriculture production would need to increase by 50 percent. The researchers believe reducing food waste would significantly help the environment and economy.

Another issue the report focused on was trash in the ocean. Plastics make up about three-quarters of all the litter found in the ocean, and without any intervention, the report says 100-250 million tons of plastic will be floating around by 2025. The report commends countries and regions that have banned single-use plastic items, like bags and straws, but says reducing plastic use isn't enough. It notes the world needs to improve trash collection and recycling to prevent litter from reaching the ocean in the first place.

One piece of good news in the report is humanity's ability to change course. The researchers believe the world already has much of the technology needed to improve the health of the planet and slow climate change. But as the leaders of the project said, "What is currently lacking is the political will to implement policies and technologies at a sufficient speed and scale."