UN Members Criticize US For Calling Meeting On Iran Protests 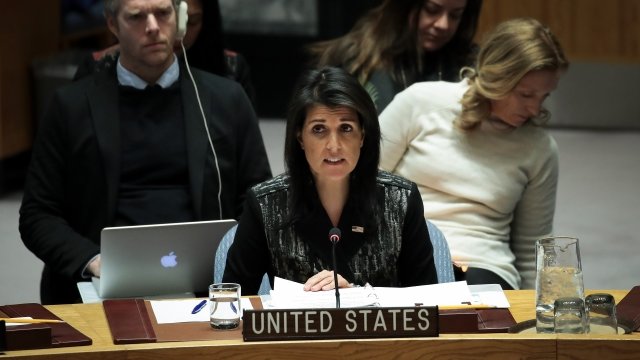 Other countries called the meeting a way for the U.S. to drum up opposition to the 2015 nuclear deal.

The United States received harsh criticism at a United Nations Security Council meeting it called for in the first place.

It's unclear what the U.S. hoped to accomplish by calling the meeting. U.S. Ambassador to the U.N. Nikki Haley used the impromptu session to chastise Iran for its response to recent anti-government protests.

Protests against Iran's government went on for six days; at least 22 people died and hundreds were arrested. The country's leaders blamed the unrest on outside "enemies."

The entities are subsidiaries of Iran's Shahid Bakeri Industrial Group, which is already under U.S. sanctions.

But other members were less concerned about Iran than they were the U.S.

That's because the Iranian protests don't constitute an international threat, according to France's ambassador.

Members called out Haley and accused the U.S. of trying to politicize unrest in Iran. Ambassadors also said the U.S. was trying to stir up anti-Iranian sentiments to undermine the 2015 nuclear deal with the country.

Later this month, President Donald Trump will once again have to decide whether to certify Iran's compliance with the deal, which lifts sanctions against Iran as long as it doesn't pursue nuclear weapons.

Last time Trump had to decide on the deal, he didn't recertify it. Instead, he sent the decision to reimpose sanctions on Iran to Congress. The deadline passed without action.