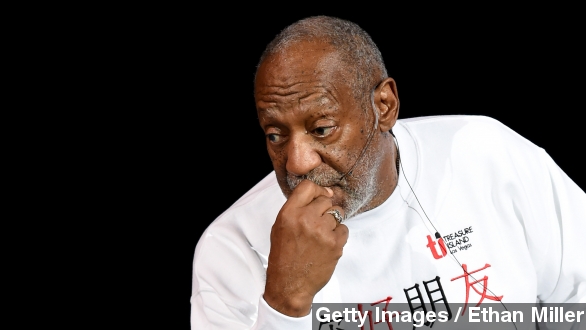 A woman has filed a civil lawsuit against comedian Bill Cosby, adding to the list of women accusing him of sexual assaulting them in the past.

Another woman is alleging comedian Bill Cosby sexually assaulted her in the past — this time a 55-year-old woman who says he abused her in Los Angeles in 1974, when she was 15 years old.

According to the Los Angeles Times, Judy Huth filed a civil lawsuit claiming she and a 16-year-old friend met Cosby at a park before they were taken to the Playboy Mansion. (Video via NBC / “Late Night With Jimmy Fallon”)

It was there at the mansion Huth claims Cosby fed her drinks and later sexually assaulted her and forced her to perform a sexual act without her consent. (Video via 20th Century Fox / "Bill Cosby - Himself")

Although California has a 10-year statute of limitations on lewd or lascivious acts involving children, The Washington Post notes Huth wants the statute waived since she didn’t realize the extent of her emotional trauma until just recently.

While the lawsuit is the first to come from a recent string of allegations against Cosby, it's just the latest sexual-abuse-related suit to be filed against the 77-year-old comedian.

In 2005, a woman named Andrea Constand filed a lawsuit against Cosby charging him with battery and assault and asking for $150,000 in damages. Cosby settled with Constand out of court the next year.

Since then, 16 other women have gone public with allegations against Cosby with 12 of them coming forward just in the past two months. (Video via CNN)

And on December 3 The Daily Beast published the story of a man who claims he saved his friend from being assaulted by Cosby in 1984.

The allegations have created a PR nightmare for Cosby, with his refusal to make any statements on the issue only compounding the problem.

So far, both Netflix and NBC have scrapped future projects with the comedian and TV Land has pulled all Cosby Show reruns. (Video via Comedy Central / “Bill Cosby… Far From Finished”)

Cosby’s lawyer has yet to respond to this latest news on the lawsuit, but has denounced similar accusations in the past.