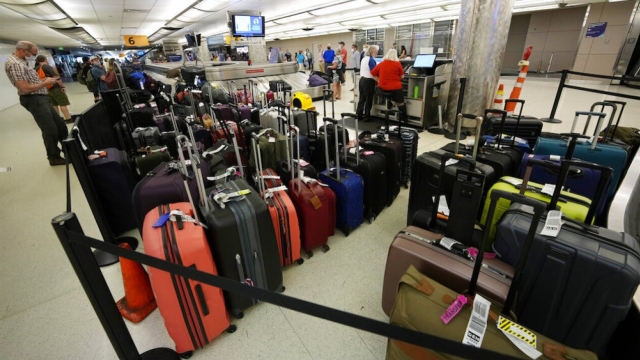 Caroline Teel with Smarter Travel.com says travelers losing luggage has been a serious issue this summer.

We've been hearing so much about airline cancellations and delays. But another problem affecting thousands of travelers lately is lost luggage, which can be even more of a nightmare, as it was for one woman recently.

Celeste Small was looking forward to being a bridesmaid in a friend's destination beach wedding. But, when her Allegiant flight touched down, her travel companion found her luggage waiting on the baggage carousel, while Small did not.

"Her bag came, and I said, 'Where's my bag?' We checked them together," Small said.

Her suitcase was lost. But, the worst part was that inside the lost bag was her custom-made blue bridesmaids' gown.

Small was devastated, as she couldn't stand next to the bride at the wedding.

Worse, she had to spend $400 on new clothing and makeup just to attend the nuptials.

"I had to buy undergarments, another dress, shoes, clothes to wear," she said.

HOW TO AVOID A LUGGAGE NIGHTMARE

The U.S. Department of Transportation says the 17 biggest airlines in the country mishandled more than 215,000 bags in April this year and another 231,000 in May.

Caroline Teel with Smarter Travel.com says it is a serious issue this summer.

"Lost luggage is a huge problem these days," she said. "Airlines are understaffed. They're losing bags left and right."

Teel says to avoid the risk of lost luggage, fly with a carry-on only if possible. And if you need to check a bag, she says the key is never to put any valuables or anything you need immediately upon landing (such as a dress for a wedding) into that checked suitcase.

Teel also suggests packing a tracking device, such as an Apple AirTag, in your luggage.

"In some instances, travelers have been able to point out to the gate agent, 'Hey, I see my bag. It's on the tarmac,'" she said.

Allegiant finally located Small's bag the day after the wedding. Small says it was inadvertently sent to the wrong city.

In a statement, a spokesperson said, "We sincerely apologize for this inconvenience," adding that it's rare for Allegiant to mishandle a passenger’s bag.

That appears to be true. In May, Allegiant was the best out of the 17 airlines regarding lost luggage, mishandling one of every 630 bags. Unfortunately for Small, her bag was that one.

If something is essential, especially the day you arrive, put it in a carry-on, so you don't waste your money.