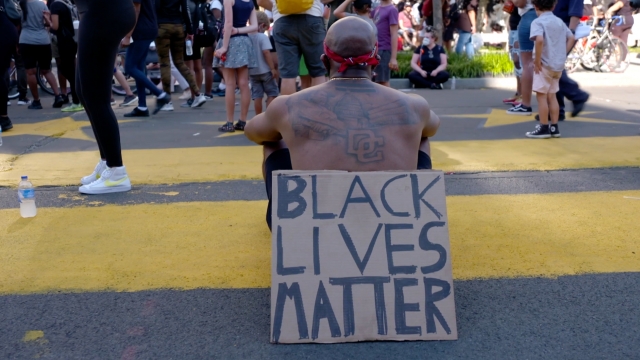 Racial trauma, or race-based traumatic stress, is the collective effect racism has on an individual's mental and physical health.

"What makes it traumatic is how you experience it," Kelly Baker, marriage and family therapist and founder of Onyx Trauma Healing Center told Newsy.

Similar to PTSD, racial trauma or race-based traumatic stress is the collective effect racism has on an individual's mental and physical health. It can be from major experiences like workplace discrimination or hate crimes, or it can be the result of an accumulation of many small indignities, called microaggressions, or systems or institutions that enforce structural oppression.

"There was a national survey done by the American Psychological Association, and about 25% of all African Americans, 30% of all Native Americans, report that they experienced at least one of those experiences at least once a week," David Williams, professor of public health and African and African American studies at Harvard University, told Newsy.

The APA says not only do Black, Indigenous, Latinx, and Asian American people significantly suffer from racial trauma, but that it can also compound with additional oppression based on gender or sexual orientation.

"It depends on the intensity and the frequency of how often you experience racism or how severe the event is. But you might start with just race-based stress. So something will be racist, and you'll be exposed to it, and you'll feel stress. But racial trauma is really when it has those long-term effects," said Dr. Candice Nicole Hargons, assistant professor at the University of Kentucky and founding director of the Center for Healing Racial Trauma.

Immediate symptoms can include increased heart rate or blood pressure, heightened cortisol levels, sweating, or tension in the body. Long-term, chronic exhaustion and fatigue are among the most common symptoms.

"Just sadness, underlying or overt anger, you know, even thinking differently about yourself. So sometimes believing or starting to endorse those stereotypes that people might have about your racial group, if you're experiencing racial trauma, you might have some of that internalized racism," Hargons said.

"Increased hypervigilance, the having the nightmares or flashbacks, avoidance of situations where they may not perceive it as threatening. All of those are consistent with what we find in race-related stress and PTSD," Dr. Erlanger Turner, assistant professor of psychology at Pepperdine University and author of "Mental Health Among African Americans: Innovations in Research and Practice" said.

"You know, bouncing back and forth between that and numb and never really feeling safe and socially connected and supported. And that also affects your brain and how your brain develops," Baker of the Onyx Trauma Healing Center said.

America’s health care system impacts racial trauma too, making it more difficult to find not only help, but someone who understands a patient’s experience. A 2015 study found that in the U.S., 86% of psychologists were White, 5% were Asian, 5% were Hispanic, and 4% were Black.

Meanwhile, some of the experts we spoke with are setting out to help. Hargons released Black Lives Matter Meditations for racial trauma victims and White allies. Baker has helped organize Facebook Live videos with her local NAACP branch where anyone can connect to learn more about racial trauma. She’s included sharing her experiences.

"I don't think you can say that there was ever a time for me that I was never exposed to racism. You know, when I think about my family, you know, my mom, my grandmother and the things that my mother experienced that were clearly racist definitely affected how she parented her children," she said.

What can be done to respond to racial trauma? Turner tells Newsy adding an official diagnosis of racial trauma to the DSM-5, an encyclopedia of sorts for mental health professionals, isn't the solution. He suggests racial trauma’s existence is something everyone should be aware of, especially health care providers and policymakers.

"If you are White, you do need to make sure that you try to understand that person's experience, that you provide some sense of solidarity, that you don't apologize. I think people oftentimes want to apologize in these situations, and that's really not helpful. We need solutions."