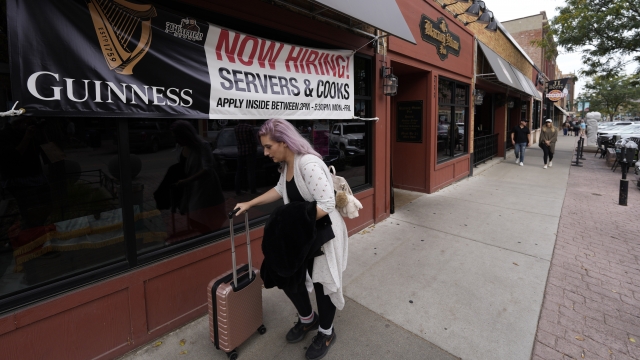 The U.S. unemployment rate dropped to 4.2% despite the weakest monthly gain in nearly a year. Employers added only 210,000 jobs in November.

America's unemployment rate tumbled last month to its lowest point since the pandemic struck, even as employers appeared to slow their hiring — a mixed picture that pointed to a resilient economy that's putting more people to work.

The government reported Friday that private businesses and other employers added just 210,000 jobs in November, the weakest monthly gain in nearly a year and less than half of October's gain of 546,000.

But other data from the Labor Department's report painted a much brighter picture. The unemployment rate plummeted from 4.6% to 4.2% as a substantial 1.1 million Americans said they found jobs last month.

The U.S. economy still remains under threat from a spike in inflation, shortages of labor and supplies and the potential impact of the omicron variant of the coronavirus. But for now, Americans are spending freely, and the economy is forecast to expand at a 7% annual rate in the final three months of the year, a sharp rebound from the 2.1% pace in the previous quarter, when the delta variant hobbled growth.

Employers in some industries, such as restaurants, bars, and hotels, sharply slowed their hiring in November. By contrast, job growth remained solid in areas like transportation and warehousing, which are benefiting from the growth of online commerce.

The sharp drop in the unemployment rate was particularly encouraging because it coincided with an influx of a half-million job-seekers into the labor force, most of whom quickly found work. Normally, many such people would take time to find jobs and would be counted as unemployed until they did. The influx of new job-seekers, if it continues, would help reduce the labor shortages that have bedeviled many employers since the economy began to recover from the pandemic.

“That’s good news for job seekers and workers, and for businesses too," said Julia Pollak, chief economist at online jobs site ZipRecruiter. “It looks like the supply constraints are easing a bit with the unemployment rate low and wage growth high” — two factors that often encourage people to search for work.

November's report reflects a divergence in two surveys conducted by the government. The unemployment rate is calculated from a survey of households, which found that 1.1 million more people reported that they were employed last month. A separate survey of employers, known as the payroll survey, found that just 210,000 jobs were added last month.

The results of the two surveys typically match up over the long run, but can show very different results in a specific month.

The survey of households found that the number of unemployed Americans sank in November to 6.9 million, not far above the pre-pandemic number of 5.7 million. And average wages, which have been rising as employers try to attract or keep workers, increased a strong 4.8% from a year ago.

For months, employers have been struggling with worker shortages because many people who lost jobs in the pandemic have not, for various reasons, returned to the workforce. But last month, nearly 600,000 people came off the sidelines to look for jobs and were generally hired quickly. The government classifies people as unemployed only if they’re actively seeking work.

As a result, the proportion of Americans who are in the workforce rose from 61.6% to 61.8%, the first significant increase since April. If that much-anticipated development continues, it could point to stronger job growth ahead.

Still, the government's survey of businesses suggested that some employers were more cautious about hiring last month. Restaurants, bars and hotels added just 23,000 jobs, down from 170,000 in October. That could reflect the effects of an uptick in COVID-19 cases last month and a reduction in outdoor dining.

Retailers cut 20,000 jobs, a sign that holiday hiring hasn't been as strong as in previous years. But transportation and warehousing firms added 50,000 positions, which indicates that online retailers and shippers anticipate healthy online shopping.

The jobs outlook for the coming months has become hazier with the emergence of the omicron variant. Little is definitively known about omicron, and widespread business shutdowns are considered unlikely. Still, omicron could discourage some Americans from traveling, shopping and eating out in the coming months and potentially slow the economy.

The uptick in the number of people looking for work is important because even as the jobless rate has steadily declined this year, the proportion of Americans who are working or searching for jobs has barely budged. A shortage of job-seekers tends to limit hiring and force companies to pay more to attract and keep employees. Higher pay can help sustain spending and growth. But it can also feed inflation if businesses raise prices to offset their higher labor costs, which they often do.

One result is that there are now about 3.6 million fewer people with jobs than there were before the pandemic. Yet only about one-third of them are actively looking for work and are classified as unemployed. The remaining two-thirds are no longer job-hunting and so aren’t counted as unemployed.

Whether or not more people start searching for jobs is a critical question for the Federal Reserve. If the proportion of people in the workforce doesn’t rise much, it would suggest that the Fed is nearing its goal of maximum employment.

With inflation at a three-decade high and far above the Fed’s 2% annual target, reaching its employment mandate would heighten pressure on Chair Jerome Powell to raise interest rates sooner rather than later. Doing so would make loans more expensive for many individuals and businesses.

About half of those who have dropped out of the workforce have retired. The other half includes parents, mostly mothers, who stayed home to care for children during closings of schools and day cares. For some of these women, child care remains unavailable or unaffordable. Some other people have become self-employed. And others continue to delay their job hunts for fear of contracting COVID-19.