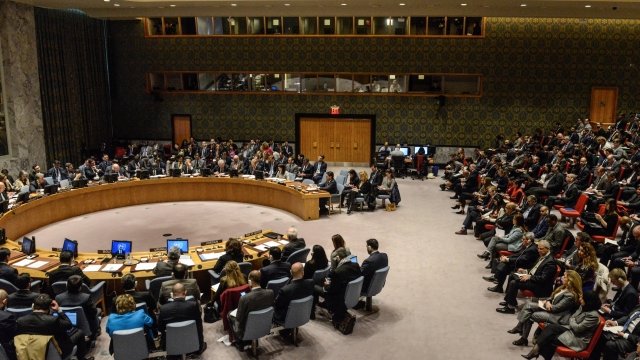 At least four people have died in the unrest that followed President Trump's decision to recognize Jerusalem as Israel's capital.

In an emergency meeting of the United Nations Security Council, all but one nation condemned the U.S. recognizing Jerusalem as Israel's capital. That one nation? The U.S.

At least four Palestinians have died in the unrest that's followed President Donald Trump's decision, which went against the warnings of the Arab League, the UN and European allies.

In an hourslong meeting Friday, 14 security council members discussed their opposition to Trump's move. The group didn't put out an official statement or propose a resolution since the U.S. maintains veto power on the council.

Palestinians Can Likely Keep Their Office In Washington, DC âÂ For Now

Palestinian leadership cut communication with the U.S. after the news its D.C. office may be forced to close.

The status of Jerusalem is a key part of negotiations between the Palestinians and Israelis. The two groups have been at odds over the city, the surrounding West Bank and the Gaza Strip for decades. UN resolutions require that Jerusalem's status be negotiated at the end of peace talks between the two sides.

The Journal quoted one unnamed council diplomat as saying, "Others would blame America and say America is in violation of Security Council resolutions, ... which is not very good for the message we want to send to the world."