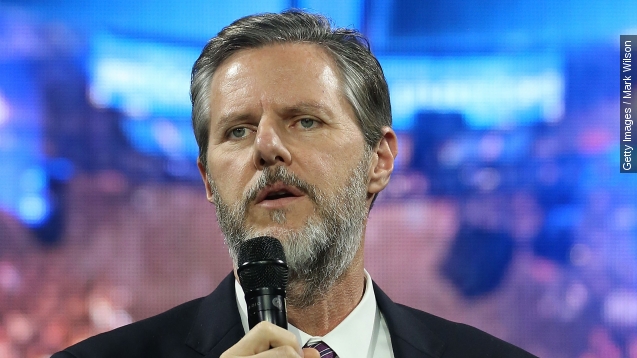 The president of Liberty University urged students to get concealed-carry permits. His remarks also singled out Muslims.

"If more good people had concealed-carry permits, we could end those Muslims before they walked in and killed them," the university's president said.

Liberty University is near Virginia Tech. In 2013, the Christian school changed its policies to allow students with permits approved by university police to carry concealed firearms anywhere on campus except residence halls. (Video via Liberty University)

"If some of those people in that community center had what I've got in my back pocket right now," Falwell said during the convocation.

That move, in itself, could still be considered controversial, with 19 states banning the practice of concealed carry on college campuses.

But Falwell's mentioning of Muslims, in particular, has drawn the most criticism.

Virginia Gov. Terry McAuliffe called Falwell's comments "rash and repugnant" and said in a statement to The Washington Post, "Those of us in leadership positions ... must take care to remember the tremendous harm that can result from reckless words."

Falwell told The Post his comments were directed to Islamic terrorists but said, "If I had to say what I said again, I'd say exactly the same thing.” (Video via Liberty University)

He also told The News & Advance since his speech on Friday, more than 100 students have signed up for the campus' free concealed carry class.