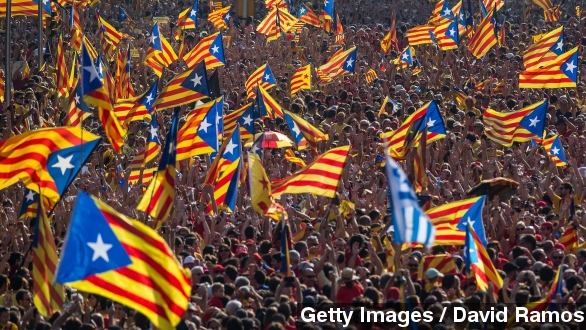 Almost 2 million people participated in a non-binding vote on Catalan independence from Spain Sunday over the Spanish government's objections.

Catalan officials had been ordered to suspend the vote by Spanish officials, who argued it violated the nation's constitution, but regional leaders decided to hold the vote as a symbolic gesture anyway.

And now estimates are saying just over 80 percent of Catalan voters support independence from the Spanish government.

Supporters of independence say the turnout and the result of the vote are signs Spain's government cannot ignore, and argue the region should be allowed to hold an official, binding referendum.

Catalonia is a semi-autonomous region of Spain containing about 7.5 million people. It has its own cultural identity and even its own dialect.

The push for independence has resurfaced in recent years due partly to economic issues. The wealthy region makes up one-fifth of Spain's economy and helps shore up the rest of the country through taxes.

Also, the BBC says protesters, such as this right-wing group who burned a Catalan flag the day of the vote, illustrate that many Catalonians wish to stay a part of Spain.

Prior to the vote, the Spanish Prime Minister warned charges could be filed against the vote's organizers for holding an invalid poll, but the government hasn't yet made good on that threat.