Up To 300 Dead After Mediterranean Migrant Boats Sink 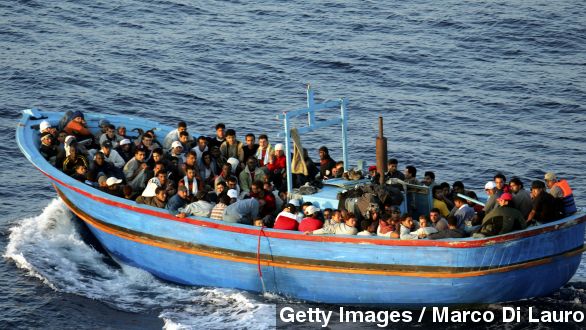 Hundreds of migrants departing from North Africa are feared dead after only a few survivors were rescued in the Mediterranean Sea on Wednesday.

As many as 300 migrants are believed to have died Wednesday after attempting to reach the Italian island of Lampedusa in overcrowded boats and frigid temperatures.

United Nations spokeswoman Carlotta Sami said Wednesday: "Nine have been rescued after 4 days at sea. The other 203 were swallowed by the sea." (Video via United Nations High Commissioner for Refugees)

Hours later, she confirmed that while three boats had been accounted for, a fourth with at least 100 more migrants was missing. (Video via Guardia Costiera)

According to the Switzerland-based International Organization for Migration, four boats departed from a beach near Tripoli, Libya, on Saturday. Nine survivors were then picked up in international waters by a commercial vessel Wednesday. The rest are presumed drowned.

Speaking to IOM, one of the survivors said they were forced to board inflatable boats at gunpoint and robbed by human traffickers. (Video via Guardia Costiera)

One hundred and five survivors were rescued by the Italian Coast Guard earlier on Monday. Twenty-nine of them died from hypothermia before they could return to shore. (Video via United Nations High Commissioner for Refugees)

The deaths have some saying Europe needs to do more to protect migrants fleeing Africa and the Middle East. (Video via European Council)

Last year, Italy ended its "Mare Nostrum," or "Our Sea" mission, which provided resources in the Mediterranean to find and rescue migrants at risk of drowning in unseaworthy boats. (Video via United Nations High Commissioner for Refugees)

That was replaced with the European Union's Operation Triton. But unlike Mare Nostrum, which used Italian navy ships, Voice of America says Triton uses fewer, smaller vessels and patrols closer to Europe's shoreline.

BBC's Matthew Price points out the difference between the two programs, writing: [Triton] cannot pre-empt trouble in international waters — it can only act when lives are immediately at risk. The Italian operation was set up differently. The naval crews knew they had one single purpose — to prevent death."

According to the United Nations, almost 3,500 migrants died trying to reach Europe by sea last year. In total, at least 218,000 made the journey.