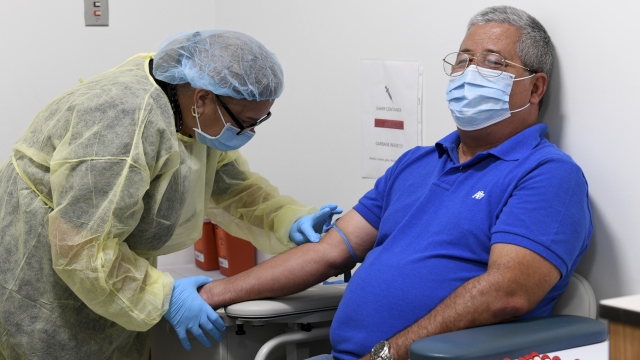 Some experts argue that stopping the virus for all needs to be a global effort but suspicions between nations complicate partnerships.

Why is vaccine nationalism — or a country hoarding vaccines — a concern? Because a good way to achieve global immunity is through global vaccinations. Experts say 60 to 70 percent of the population needs to have immunity to stop the spread of the virus.

"That vaccine should be made available to the whole world. Rich and poor alike, developed and developing, all races and all beliefs," says Ghana President Nana Addo Dankwa Akufo-Addo.

But money and national interest may stand in the way. The World Health Organization established the COVAX facility as a way to distribute vaccines equitability. Richer countries buy into a program that invests in multiple vaccines. In turn, prices are lower for developing countries. 172 countries have joined. But Russia, China and the US have chosen not to.

"A threat anywhere is a threat everywhere. And so it's in our national interest to help control the coronavirus pandemic around the globe," says Dr. Richard Besser, former acting director at the CDC.

What's It Like To Volunteer In A COVID-19 Vaccine Trial?

The Moderna Vaccine Trial is a blind study where participants don't know if they're getting a COVID-19 vaccine or a placebo.

White House Deputy Press Secretary Judd Deere tells Newsy that the reason the U.S. isn’t joining the other countries in the COVAX approach is because it's "influenced by the corrupt World Health Organization and China."

Former CDC Acting Director Richard Besser says joining an alliance like COVAX can increase the chances of getting a working vaccine.

He says, "there's no guarantee that a vaccine that's developed will be developed by a U.S. manufacturer. It could be developed elsewhere."

Poll finds Black respondents not as interested in taking a vaccine when compared to their White and Hispanic counterparts.

Vaccine nationalism emerged before in 2009 during another global pandemic: the Swine Flu. A vaccine was developed within 7 months after it killed hundreds of thousands of people worldwide. High-income countries had direct deals with pharmaceutical companies for pre-orders that left out poorer countries. The COVAX facility aims to distribute vaccines so that each country involved will have 20% of their population covered.

"I think this is a very unique approach that really shows what we learned from H1N1, where the timing of doses for the pandemic flu globally came in a sequence that wasn't as helpful to low and middle income countries," says Phyllis Arthur, Vice President of Infectious Diseases & Diagnostics Policy at the Biotechnology Innovation Organization.

But we are already seeing examples of countries hoarding COVID-19 drug treatments. The U.S. has cornered the market by buying up most of the antiviral medication remdesivir, leaving shortages in Europe. And the UK banned export of the steroid dexamethasone.

"Small states cannot also be left out in the race to seek an effective vaccine. In a global community, parts of the world cannot be made safe in isolation. Vaccine hoarding will harm us all," says Palau President Tommy Esang Remengesau Jr.