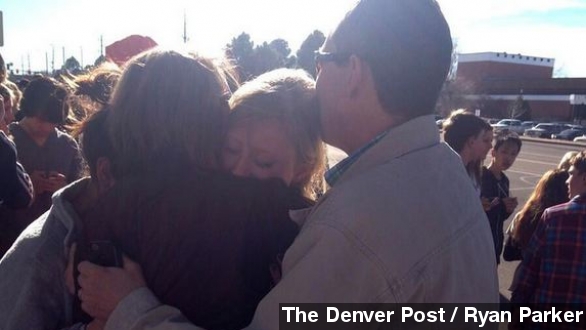 One student was injured when a gunman opened fire at Arapahoe High School in Centennial, Colo. The suspect, a student at the school, is dead.

One student is injured after a gunman opened fire at Arapahoe High School in Centennial, Colo., Friday before authorities say he took his own life.

​The chaos started before 12:30 p.m. when a school employee saw a young man running with a shotgun. (Via NBC)

"The janitor tells us the shooter called out the name of a man seen here showing off a debate team trophy — Tracy Murphy, the school librarian." (Via ABC)

Authorities did not immediately name the suspected shooter, but KMGH identifies him as Karl Pierson. According to the news station, Pierson had an axe to grind with Murphy from a previous altercation.

GRAYSON ROBINSON: "This shooting was the result of revenge on the part of the shooter because of a confrontation or a disagreement between the shooter and the teacher."

"We heard gunshots, and Dana came running down the stairs and saying someone's been shot."

SWAT teams immediately responded to the scene. When they were sweeping the halls, they found the suspected shooter, who they say appeared to have died of a self-inflicted gunshot wound.

Investigators also found two explosive devices believed to be Molotov cocktails, one exploded within the school. Authorities disposed of the other device. (Via KUSA)

The school is just 16 miles from the Aurora movie theater where a shooting took place in 2012 and just 8 miles from Columbine High School. (Via CNN)

Although the shooting comes on the eve of last year's Newton, Conn., shooting, authorities told reporters they do not believe Newton's shooting played any part in Friday's incident. (Via Al Jazeera)

The students who was shot arrived at a local hospital in serious condition but was downgraded to critical after surgery. The other student who authorities initially thought was also shot had blood on her from the first victim. Sheriff Robinson said the school is expected to remain closed until Sunday while investigators collect and evaluate evidence.