UPS, FedEx Attempt To Catch Up On Late Christmas Deliveries 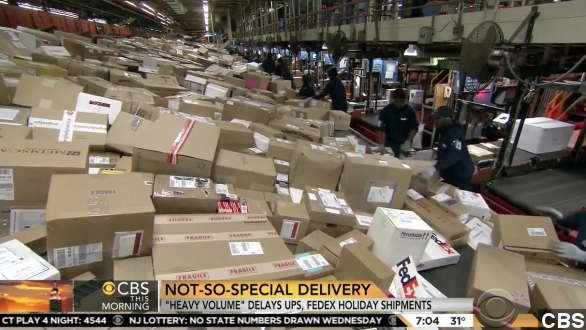 Both FedEx and UPS failed to deliver packages in time for Christmas. The companies blame a "perfect storm" for the delays.

UPS and FedEx failed to live up to their guaranteed Christmas delivery dates, and as ABC says, that left a few empty spots under the tree this Christmas.

"UPS and FedEx packages were delayed, ruining Christmas for thousands of customers. ... One UPS official blamed quote 'a perfect storm' of factors for its problems this year."

Naturally, consumers were angry with both companies. One woman told Fox News she was worried about what to tell her young child.

"How do you tell a 6-year-old she's not going to get her present for Christmas?"

And it's worth pointing out — these customers didn't wait until the last minute. One man said he ordered his package on December 1 and it still didn't show up in time for the holiday.

​WOMAN: "I waited around for hours and hours for it to show up, and it never did."

MAN: "It's terribly disappointing." (Via HLN)

UPS has already delivered 132 million packages in the last week alone, and blamed the backlog on a surge in online sales and bad weather. CBS reports the companies tried to prepare for the worst:

​ART HOLLOWAY: "I would describe it as controlled chaos."

Customers didn't try to hide their anger, taking to UPS's Facebook page to complain as well.

KERRY STALLINGS: "So you blew it by over guaranteeing what you could do, taking money from people for things you knew you couldn't handle."

For its part, UPS tried to handle the angry comments, with a representative called Quinn responding to each complaint by apologizing and offering help or advice. (Via Facebook / UPS)

Both companies were back in full force Thursday morning trying to deliver the late packages. Better late than never, right?