Army Shreds Immigrant Enlistments, Leaves Some At Risk Of Deportation 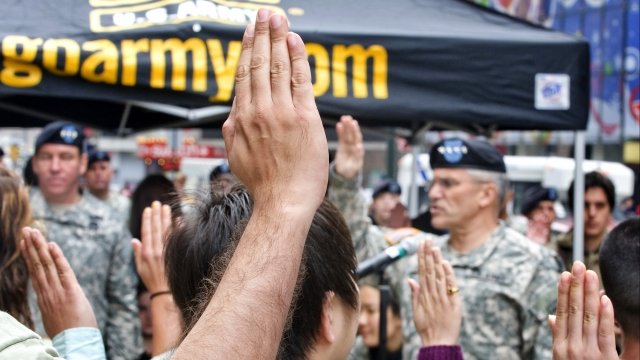 The Pentagon denied ordering any mass cancellation of the contracts.

Recruiters for the U.S. Army are canceling enlistment contracts en masse for immigrants and foreign-born recruits, according to The Washington Post.

Affected recruits and former defense officials told the paper contracts are getting shredded to avoid time-consuming background checks. This allows recruiters to meet recruitment targets before the fiscal year closes.

The Pentagon says it hasn't ordered any mass cancellation of these contracts and declined to comment on whether recruiters may have been confused by recent directives.

This news comes one year after the Pentagon suspended the Military Accessions Vital to National Interest (MAVNI) program. The program was created to recruit immigrants with vital skills in medicine or language. In return, recruits could apply for U.S. citizenship.

Since 2009, MAVNI helped enlist more than 10,400 individuals. Approximately 10,000 are still in the service or waiting to serve, but the program was suspended to implement new security protocols. The Pentagon reportedly began considering dismantling the program earlier this summer, which would leave thousands at risk of deportation.

Recruits affected by the suspension filed two lawsuits arguing the government went back on its contract, as well as discriminated against naturalized citizens.

These Politicians Want To Stop The Deportation Of Veterans

Sen. Tammy Duckworth introduced a comprehensive set of bills that would protect noncitizen veterans from deportation.

In regard to the contract cancellations, MAVNI creator Margaret Stock told The Washington Post: "It's a dumpster fire ruining people's lives. ... We have a war going on. We need these people."