US Compensates Victims In Iran Hostage Crisis Over 36 Years Later 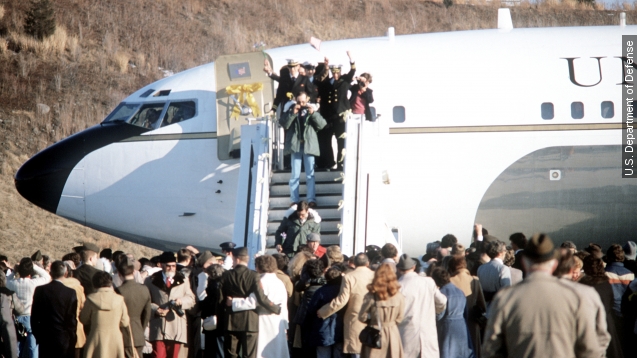 More than three decades ago, dozens of Americans were held hostage for 444 days in Iran. Now, the U.S. government will compensate them.

The U.S. government will compensate the American Embassy personnel held hostage for 444 days in Iran from 1979 to 1981.

It's a provision signed into effect with a spending bill that was approved last week. In total, the government is giving up to $4.4 million to each of the 53 American hostages or their estates. Thirty-seven are still living while 16 died after they were released. (Video via ABC)

The U.S. embassy in Tehran was overrun by student militants on Nov. 4, 1979, after the country's deposed Shah went to a U.S. hospital for medical treatment. Many Iranians demanded the shah be returned to Iran so he could face execution for crimes during his reign. (Video via The U.S. National Archives and Records Administration)

Former President Jimmy Carter refused to negotiate with the militants, claiming the U.S. wouldn't yield to blackmail. Many hostages reported being physically and psychologically tortured. (Video via PBS)

The hostages were released Jan. 20, 1981 — the same day Ronald Regan was sworn into office.

This compensation bill has been a long time coming. One former hostage said he was brought to tears after learning the news.

He told The New York Times: "I had to pull over to the side of the road, and I basically cried. It has been 36 years, one month, 14 days, obviously, until President Obama signed the actual bill, until Iran was held accountable."