US Defense Secretary At DMZ: 'Our Goal Is Not War' With North Korea 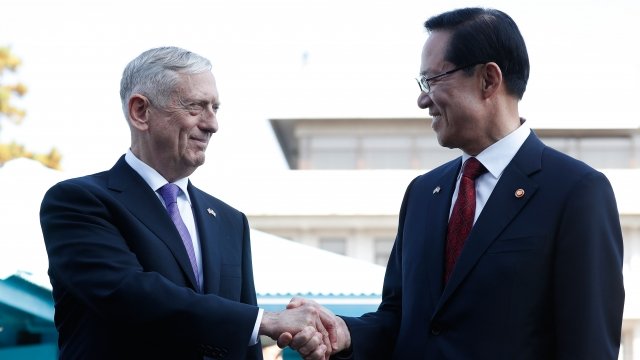 At the Demilitarized Zone on Friday, Defense Secretary Jim Mattis said the U.S. is still committed to resolving tensions with North Korea peacefully.

"Our goal is not war," Mattis said.

During a visit to the Demilitarized Zone between North Korea and South Korea, Mattis accused the North of violating human rights and pursuing nuclear weapons to "threaten others with catastrophe."

But he added the Trump administration's goal is "the complete, verifiable and irreversible denuclearization of the Korean Peninsula" through diplomacy, not violence.

That approach is much different than the one President Donald Trump has suggested.

According to the BBC, Abe promised during a press conference that his coalition would "dramatically show countermeasures" against Pyongyang.

In September, Trump tweeted that the North "won't be around much longer" if the country continues provocation. Pyongyang called the tweet a declaration of war.

Trump is scheduled to make his first trip to Asia as president next Sunday. Officials told reporters a stop at the DMZ isn't off the table for the president's visit. But the move could be seen by North Korea as a provocation.

Tensions between the U.S. and the North have been high after a series of missile tests by Pyongyang and heated verbal exchanges between Trump and North Korean leader Kim Jong-un.

But things on the Korean Peninsula have been seemingly quiet in recent weeks. North Korea's latest weapons test took place over a month ago, when it fired a missile over Japan.