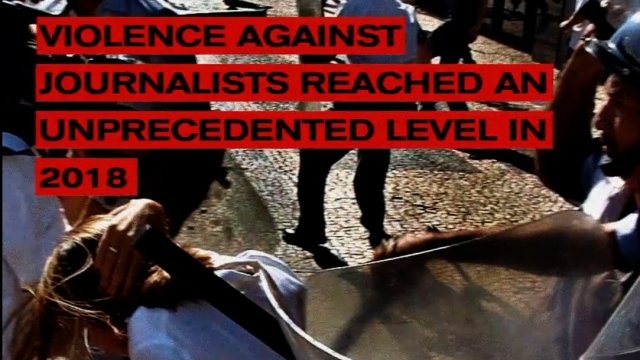 Violence against journalists reached unprecedented levels this year, according to the 2018 World Press Freedom Index.

Violence against journalists reached "unprecedented levels" in 2018, according to this year's World Press Freedom Index. The nonprofit organization Reporters Without Borders publishes the index, which each year evaluates the level of press freedom in 180 countries.

This year, at least 80 journalists were killed worldwide, an uptick from last year. Nearly half of those murdered were killed in countries not at war like the United States. Also, for the first time, the U.S. is listed as one of the deadliest countries in the world for journalists. Overall, the U.S. fell two more spots in this year's rankings to 45, behind countries like Canada, Australia, and Germany.

The six U.S. journalists killed in 2018 include four who were murdered during a shooting at the Capital Gazette newspaper in Annapolis, Maryland. The other two died while covering severe weather in North Carolina.

The nonprofit ranks Norway, Sweden and the Netherlands as the three countries with the most press freedom. North Korea is ranked last on the list.

Also according to the report, nearly 350 journalists were detained this year, 60 have been held hostage and three are still missing.