US Enters As Rare Underdog In World Cup Semifinal 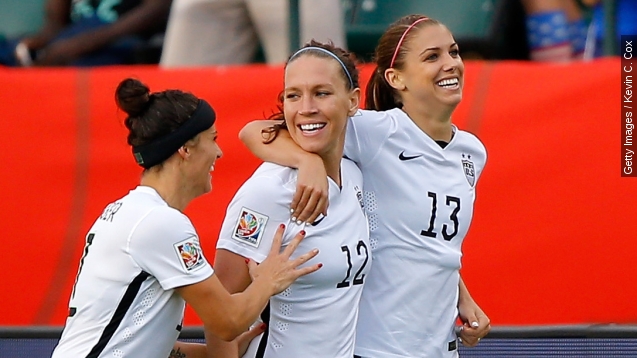 The U.S. Women's National Team faces a tough test against Germany, the top ranked team in the world.

The U.S. Women's National Team is guaranteed at least two more games this World Cup — but the team will be playing for either the elusive World Cup trophy or third place.

It's been 16 long years since the U.S. Women have brought home the trophy, and Germany on Tuesday night could be the biggest opponent in their way. The U.S. goes into the game as rare underdogs.

Tuesday's matchup pits FIFA's first and second ranked teams against each other, one with the best offense and the other with the best defense.  The high-flying, high-scoring German offense owns 20 goals in this tournament while the U.S.'s stingy defense has given up just one.

"The World Cup starts now. If this team really is for real, then they have got to find a way to beat the two or three teams that maybe are better than them and Germany is one of them," former U.S. Men's National Team player Alexi Lalas told Fox Sports.

That's why defenders Ali Krieger, Julie Johnston, Meghan Klingenberg and more will all be pivotal to the Americans' success.

An ESPN writer says, "Germany likely will have more possession, and the U.S. will need to weather some long stretches without the ball. ... Germany looked vulnerable against France, but seems to match up better against the U.S. in that it has more attackers closer to top form."

After being suspended via yellow cards for the match against China, Megan Rapinoe and Lauren Holiday will return to the U.S. lineup.

Both Germany and the U.S. are looking to become the first team to win three Women's World Cups in FIFA history.

This video includes images from Getty Images and music from Breakzlinkz / CC BY 3.0.