The US Government Just Bought $20 Million Worth Of Surplus Cheese 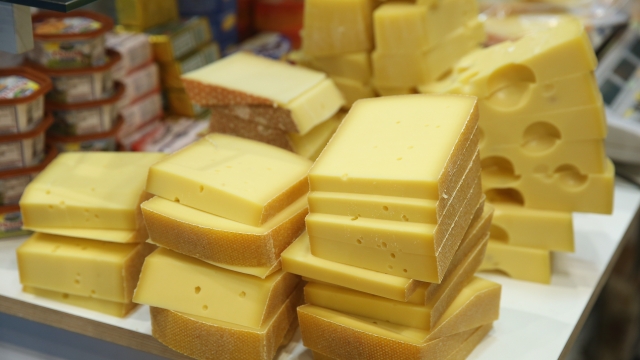 The U.S. Department of Agriculture announced this week it will purchase nearly 11 million pounds of cheese for "private inventories."

Twenty million dollars worth of cheese.

That's how much of the good stuff the federal government plans to buy to ease America's massive cheese surplus.

The U.S. Department of Agriculture announced this week it will purchase the nearly 11 million pounds of cheese for "private inventories."

Before you get too excited about government-funded grilled cheese sandwiches, that means the cheese will go to food banks and charity groups around the country.

It's a win-win. Cheese is extremely popular but often hard for food banks to get their hands on.

And dairy farmers are happy to get rid of a huge chunk of the gigantic cheese surplus that's been driving down the price they get for their milk.

The amount of cheese in storage adds up to about 1.3 billion pounds, a 30-year high.

SEE MORE: Your Parmesan Cheese May Have More Wood Pulp In It Than You Think

To put that into perspective, every American would have to eat an extra 3 pounds of cheese this year to get rid of the surplus.

Dairy production is currently at an all-time high. The USDA projects U.S. dairy farmers will produce about 212 billion pounds of milk in 2016. Holy cow is right.

The problem is that demand has slowed and prices have dropped. And cows can't just stop producing milk, so decreasing output is next to impossible.

And it's not just cheese. There's an oversupply of dairy products all over the world, like milk powder, yogurt and whey concentrate.

Unfortunately, the USDA's big cheese buy won't do much to help farmers with the milk prices. The purchase will only take care of less than 1 percent of cheese currently in storage.

But the dairy industry's profit margins are expected to increase in 2017.