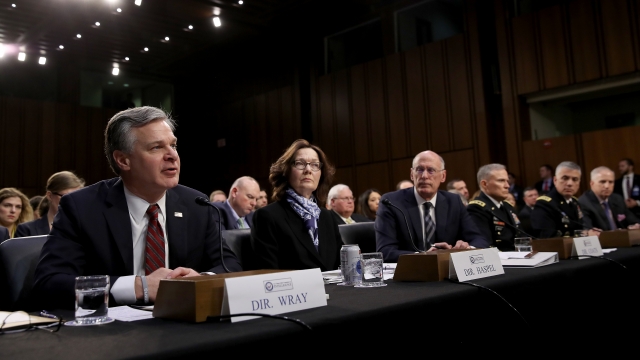 U.S. intel officials testified that North Korea isn't likely to give up its nuclear stockpiles and that Iran is in compliance with the nuclear deal.

"We must be ready to meet 21st-century challenges and recognize the emerging threats," said Director of National Intelligence Dan Coats.

President Donald Trump is expected to hold a second summit with North Korean leader Kim Jong-un next month on the grounds that denuclearization of the Korean peninsula could be on the horizon.

But Director of National Intelligence Dan Coats said while North Korea has stopped nuclear-related tests and dismantled some nuclear infrastructure, the country likely won't give up its entire nuclear supply.

"Kim Jong-un continues to demonstrate openness to the denuclearization of the Korean peninsula. Having said that, we currently assess that North Korea will seek to retain its WMD capabilities and is unlikely to completely give up its nuclear weapons and production capabilities because its leaders ultimately view nuclear weapons as critical to regime survival," Coats said.

Coats also challenged the Trump administration's assertion that ISIS has been defeated, which the president pointed to as a key factor in withdrawing U.S. troops from Syria.

According to Coats, ISIS is not only alive, but it's committed to a comeback.

"The conflicts in Iraq and Syria have generated a large pool of skilled and battle-hardened fighters who remain dispersed throughout the region. While ISIS is nearing territorial defeat in Iraq and Syria, the group has returned to its guerrilla warfare roots while continuing to plot attacks and direct supporters worldwide. ISIS is intent on resurging and still commands thousands of fighters in Iraq and Syria," he said.

Then there's Iran. Last year, President Trump claimed the country posed a nuclear threat and pulled the U.S. out of the Iran nuclear deal before reinstating sanctions.

CIA Director Gina Haspel testified that Iran's still abiding by the terms of the agreement, even if Iranian officials are weighing pushing the boundaries.

"I think the most recent information is the Iranians are considering taking steps that would lessen their adherence to JCPOA," Haspel said. "They're making some preparations that would increase their ability to take a step back if they make that decision, so at the moment, technically, they're in compliance. But we do see them debating amongst themselves as they fail to realize the economic benefits they hope for from the deal."