US Investigating Use Of Tear Gas On Rock-Throwing Migrants 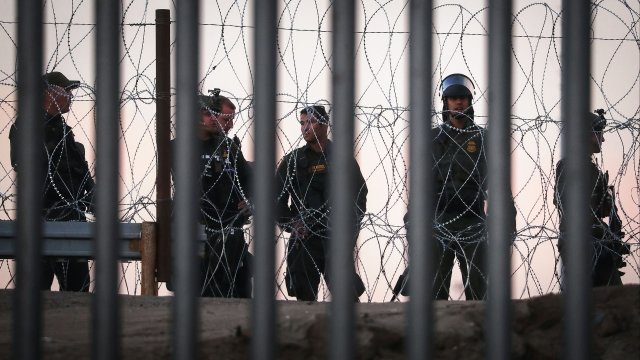 CBP says its agents used countermeasures because the migrants were throwing rocks, not because they were trying to cross the border.

U.S. border agents fired tear gas, pepper spray and smoke as a group of more than 100 migrants attempted to illegally cross into the U.S. from Mexico on Tuesday.

U.S. Customs and Border Protection, which is investigating the incident, says those countermeasures were specifically used to target some migrants who were throwing rocks at its agents and not those who were trying to breach the border fence. The agency said none of its agents "witnessed any of the migrants at the fence line, including children, experiencing effects of the chemical agents."

A spokeswoman for the Department of Homeland Security described the tear gas and pepper spray as "the minimum force necessary" to defend the border and personnel guarding it.

The migrants are part of a group numbering in the thousands who've reached Tijuana, which is across the border from San Diego.

They're waiting for the chance to apply for asylum in the U.S. But as Newsy previously reported, that process could take months since U.S. border officials are only processing a limited number of claims each day.