The US Joins The Fight Against Islamist Terrorists In The Philippines 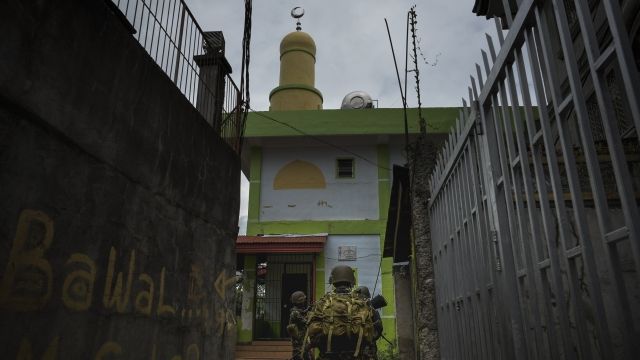 The U.S. is now giving the Filipino military "technical support" in the push to retake Marawi City from ISIS-affiliated groups.

An American surveillance plane was seen flying over Marawi City, the center of the fighting. A spokesman for the Filipino army said the U.S. was only providing "technical support."

The U.S. embassy in Manila confirmed that American special forces were involved "at the request of the government of the Philippines."

Islamist militants took over Marawi City on May 23, leading President Rodrigo Duterte to declare martial law for the entire island.

President Donald Trump called a travel ban an "extra level of safety" after at least seven people were killed in London the same night.

So far, 58 Filipino troops have been killed in the fighting; 13 were killed in a daylong firefight with militants on Friday.

Reports suggest the Maute brothers, Abdullah Maute and Omarkhayam Maute, were also killed. Officials are still validating the reports, but said there were "strong indications" the two key leaders were dead. The Maute group, along with the ISIS-wing in the Philippines, known as Abu Sayyaf, are two factions holed up in Marawi City.

A military official said the goal was to evict the Islamists and retake the city by Monday, the country's independence day.