Navy Orders 'Operational Pause' After 4 Incidents In The Pacific 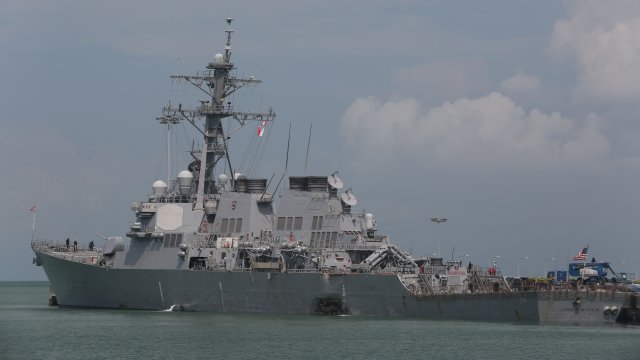 The U.S. Navy is ordering all of its ships to briefly suspend operations to review safety measures.

The U.S. Navy is ordering all of its ships to briefly suspend operations following a collision between a destroyer and a merchant ship.

The Navy's top officer, Adm. John Richardson, said the upcoming "operational pause" will ensure each ship is being run safely.

On Tuesday, the Navy announced some remains had been located inside the McCain but that it's still working on identification.

Richardson also ordered a more in-depth review of how the Navy trains its forces who are deployed to the Pacific.

That's because the McCain collision — which resulted in "significant damage" to the hull — is one of four Naval incidents to occur in the Pacific so far this year.

Part of the USS Antietam was damaged when it ran aground in Tokyo Bay, Japan, in January.

In May, the USS Lake Champlain hit a fishing boat off the Korean Peninsula.

And seven sailors died on board the USS Fitzgerald when it collided with a merchant vessel off the coast of Japan back in June.

Richardson told reporters the operational pause will be arranged so all fleets aren't out of commission at the same time.