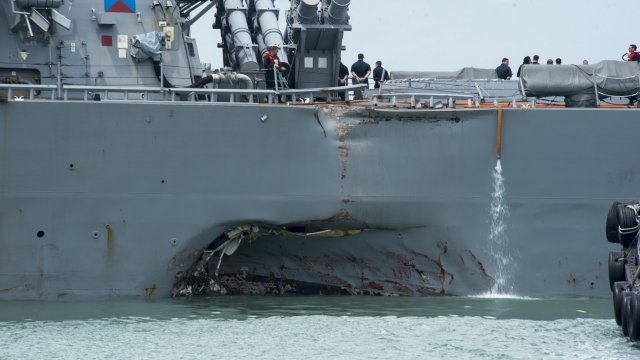 We now know what caused two deadly collisions involving U.S. Navy ships earlier this year. And officials say both could have been avoided.

In June, the USS Fitzgerald collided with a merchant ship off the coast of Japan. Seven sailors died.

Officials say that crash resulted from an accumulation of small errors by the crew, including a lack of communication and failure to follow nautical road rules.

The Navy's Leadership Shakeup Continues After Series Of Collisions

The Navy said it had lost confidence in the commanding and executive officers' abilities to lead the USS John S. McCain.

In August, the USS John S. McCain collided with an oil and chemical tanker east of Singapore. Ten sailors on board died.

The Navy says that crash primarily resulted from overconfidence, a lack of proper training and a disregard of recommendations by the commanding officer.

The Associated Press reports the Navy will propose "sweeping changes" in sailor training, crew requirements and safety protocol in response to the ship collisions. Those changes are expected to be announced Thursday.