US newspapers continue to die at a rapid rate 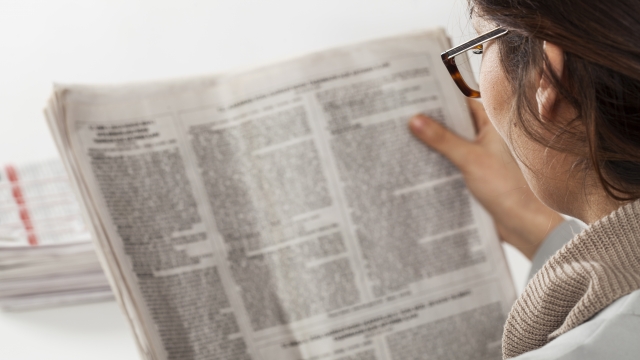 Around 7% of America's counties now have no local news outlets, and around 20% are at risk of their communities becoming news deserts.

America, we have a problem.

Newspapers, especially the smaller ones that often serve as the eyes and ears for their communities, are in danger of disappearing.

That’s according to the newest State of Local News report by Northwestern University.

“We're not only in danger; we have been losing local outlets,” said Penny Muse Abernathy, a visiting professor at the Chicago-area school.

She says as those papers vanish, so too have their trained watchdogs who monitor local government.

For communities across the United States, the problem has created news deserts.

“We have areas where people have an abundance of local news. Typically, that's around affluent areas and in metro areas. And then we have areas where people have to really, really look to find the local news and information and data that they need. And invariably those are the communities that need it the most,” said Abernathy. “They are low income, and they are traditionally underserved in marginalized communities, often with large ethnic populations that have not been served in the past well by mainstream media.”

A map developed by Northwestern’s Medill School of Journalism shows areas served by two or more papers in dark blue, one newspaper in light blue, and no newspaper in white.

Memphis, Tennessee, is 64% Black, 27% White. There, in the home of the blues, veteran journalist Wendi Thomas runs the online nonprofit news source MLK50: Justice Through Journalism.

“It can be hard to grow to the capacity you would want to be when you're relying on grants and foundations and the $10 check your mom can write every month,” said Thomas.

Thomas started MLK50 six years ago; now she and her staff of six full time journalists make sure the community has a voice.

“I saw a void in news coverage that wasn't being filled here in Memphis. And it was kind of one of those things where, like, OK, who better to do it than me?” said Thomas.

MLK 50 covers a range of topics. But its most important task is making sure those abandoned by profit-focused media are heard.

“We launched a newsroom focused on poverty, power and policy, which isn't something that traditional legacy newsrooms typically cover. But I knew we wanted to focus on marginalized people here in Memphis, the people who often aren't the subject of news coverage,” said Thomas.

Growing misinformation online and on social media is creating an environment ripe for mistrust.

During her 30-year-career, Thomas worked at mom-and-pop newspapers and at conglomerates.

“Rural communities have been hit hardest by the death of newspapers across the country,” said Thomas.

With advertising flowing to online and social media platforms, many small papers closed.

“That means that in a lot of these places, there is no one whose job it is to pay attention to how tax dollars are being spent, to what the county commission is doing, to what's happening at the jails. And in the absence of that sunlight from the media, all kinds of shady things happen in the dark,” said Thomas.

Online news organizations have popped up around the country that rely on private funding, such as foundation grants — outlets like the Texas Tribune and Block Club Chicago — but that model is tougher outside metro areas.

“Western democracies in Europe and in Asia have figured out how to do that very successfully. And in fact, if you look back, there has been a postal subsidy for most newspapers since the very beginning of this country,” said Abernathy.

Just 26% of Americans say they trust most news most of the time. This annual event underscores the vital role of news literacy in a democracy and provides audiences of all ages with the knowledge and tools to become more news-literate.