Singapore Is A Natural Fit For Trump's North Korea Summit 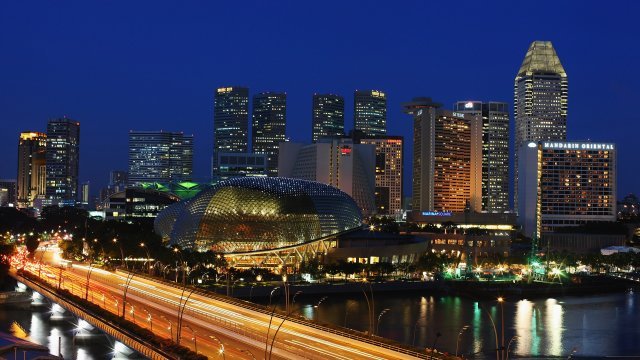 The U.S. and North Korea are holding their highest-level meeting to date in the island nation of Singapore.

On June 12, the island nation of Singapore will host the highest-level meeting ever between the U.S. and North Korea. It's a little out of the way for both countries, but Singapore is an attractive host city for the summit.

For the U.S., Singapore offers a neutral space with strict security policies that can guarantee the safety of a visiting dignitary — like President Donald Trump, for instance.

And Singapore knows how to handle a major geopolitical event. In 2015 the country hosted a groundbreaking summit between the presidents of China and Taiwan. It also hosts a regional defense summit every year that the U.S. and North Korea both attend.

Singapore also works well for North Korea. The two countries have maintained diplomatic ties, and North Korea still has an embassy and an ambassador there.

President Trump has linked sanctions relief to complete denuclearization for North Korea — but Kim Jong-un's not likely to jump at the offer.

Plus at 3,000 miles away, it's just close enough to North Korea that the country's leader, Kim Jong-un, can take a direct flight there without stopping to refuel.

For all its upsides, a Singapore summit probably won't be able to match the symbolism of the recent inter-Korean summit held at the Korean DMZ. The DMZ seemed to be Trump's first choice for the meeting, but CNN reports it was ruled out by White House advisers as too conciliatory to the North.

It's unclear how successful the summit will be, but things are starting off on the right foot: North Korea released the three American prisoners it was holding ahead of the meeting.