'Our Nation Will Prevail': US Officials Mark 16th Anniversary Of 9/11 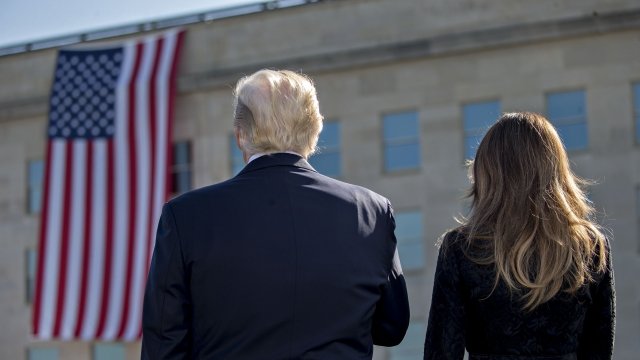 President Donald Trump and other U.S. officials commemorated the anniversary during emotional ceremonies.

Monday marked the 16th anniversary of the Sept. 11 terrorist attacks.

"Our values will endure. Our people will thrive. Our nation will prevail," President Donald Trump said at the 9/11 Memorial Observance at the Pentagon. "And the memory of our loved ones will never, ever die."

Nearly 3,000 people died in the attacks. Terrorists flew two planes into the World Trade Center and a third into the Pentagon. A fourth plane crashed in Pennsylvania after passengers tried to overpower the hijackers.

U.S. officials commemorated the somber anniversary during emotional ceremonies to honor those who died that day.

Congress will vote on the Authorization for Use of Military Force, which lets the president authorize certain strikes without congressional approval.

President Trump and first lady Melania Trump led a moment of silence from the White House before the president gave a speech at the Pentagon.

"Generations of Americans will ever be inspired by the faithful and courageous words and deeds of the heroes of Flight 93," Pence said.

And many other Americans across the country paid tribute to the fallen with ceremonies and special events.