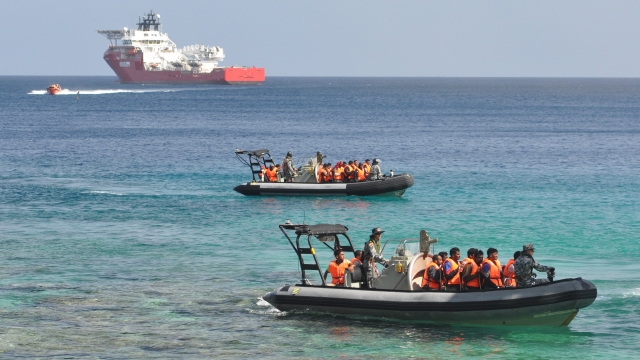 The Obama administration agreed to take in refugees and asylum-seekers from the island, but President Donald Trump has called the deal "dumb."

Australia says the U.S. has stopped screening refugees the Obama administration promised to take in.

U.S. officials in charge of vetting refugees have left Nauru, one of the Pacific islands Australia has used to house asylum-seekers and refugees. Australian officials say they think the pause is temporary.

A group of refugees on the island are part of a bigger total of 1,250 people former President Barack Obama agreed to accept from Australia. It was part of a deal he struck with Prime Minister Malcolm Turnbull.

But President Donald Trump has called the agreement a "dumb deal." And his administration's recent ban on refugees put the plan in jeopardy.

Will Trump Honor A Refugee Deal With A Close US Ally?

The Obama administration made a deal with Australia to take about 1,200 asylum-seekers. Trump tweeted he would "study this dumb deal."

The move to suspend refugee screening is making some think the Trump administration could cancel the whole thing.

When Turnbull spoke to Trump at the end of January, news reports said Trump accused Australia of trying to send the U.S. the "next Boston bombers." The two Tsarnaev brothers linked to those bombings were from the Caucasus region of Russia.