US Puts Even More Sanctions On Venezuela 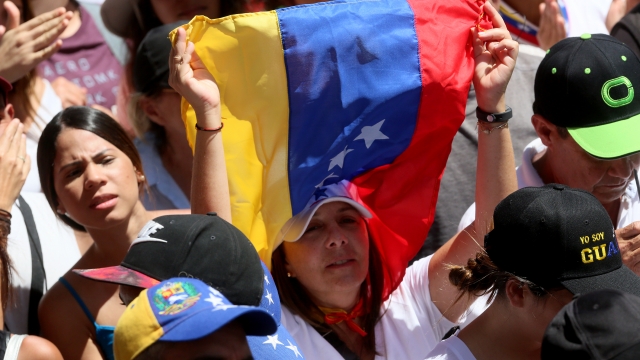 The U.S. announced additional sanctions on Venezuela, which continues to deal with political unrest.

The sanctions will apply to six Venezuelan government officials who the U.S. Treasury Department has accused of preventing humanitarian aid from reaching millions of Venezuelans. Those officials are members of Venezuela's security forces, which are loyal to President Nicolás Maduro.

Treasury Secretary Steven Mnuchin says the U.S. is is sanctioning the officials "in response to the reprehensible violence, tragic deaths, and unconscionable torching of food and medicine destined for sick and starving Venezuelans."

Just days earlier, the U.S. added sanctions on more than 50 top Venezuelan officials and a state-owned oil company. The U.S. has been pressuring Maduro to step down, recognizing opposition leader Juan Guaidó as the interim president.

In response to that round of sanctions this week, Venezuela moved some exports of oil from the U.S. to India and Europe, according to the Wall Street Journal.