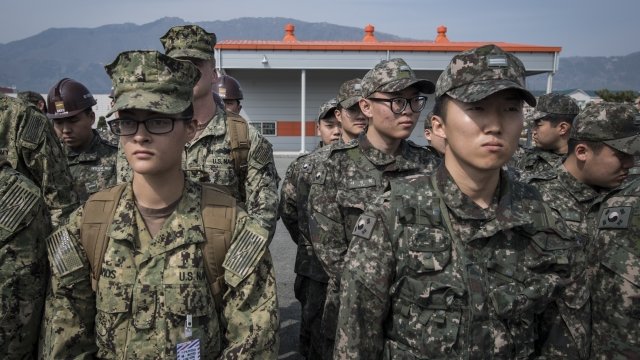 The U.S. will reportedly not be making as strong a showing as it has in the past.

The U.S. and South Korea kicked off their annual joint military exercises Sunday.

The exercises — known as Foal Eagle and Key Resolve — were originally scheduled for earlier this year but were put off until after the Olympic and Paralympic games. Nearly 12,000 U.S. troops and around 300,000 South Korean forces will take part.

The drills comes as tensions between North and South Korea are easing. But the exercises are never popular with the North, and it's not clear how they'll effect ongoing diplomatic efforts between the two countries.

During last year's Foal Eagle exercises, the North launched a number of ballistic missiles. They all landed harmlessly in the Sea of Japan.

Relations between the U.S. and North Korea also appear to be thawing lately. And the U.S. is reportedly downplaying its presence during these drills. It might not deploy certain strategic assets like nuclear submarines or supercarriers this year.

President Donald Trump is supposed to meet with North Korean leader Kim Jong-un before the end of May. The drills are expected to finish up around the end of this month.