The US Is Suspending A Major Military Exercise With South Korea 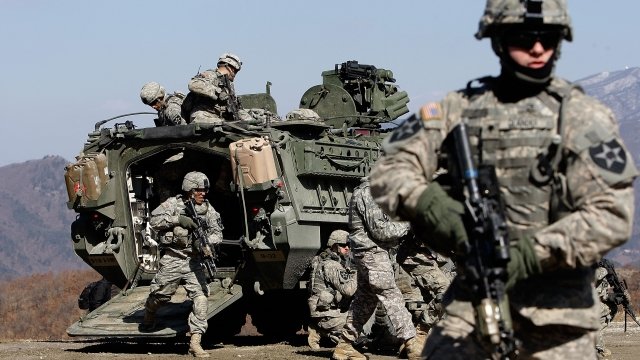 The Pentagon said in a statement the U.S. military has suspended all planning for the Ulchi Freedom Guardian defense exercise.

Days after President Donald Trump promised to end "war games" with South Korea, the U.S. announced it's canceling a major military exercise with the South.

The Pentagon said in a statement the U.S. military has suspended all planning for the Ulchi Freedom Guardian defense exercise, which was supposed to take place in August.

Chief Pentagon spokesperson Dana White said, "We are still coordinating additional actions. No decisions on subsequent war games have been made."

After meeting with North Korean leader Kim Jong-un in Singapore last week, Trump said the war games would stop "unless and until we see the future negotiation is not going along like it should."

The U.S. and South Korea carry out joint military exercises throughout the year. But North Korea's not a big fan of the drills, and the country has cited them as a reason it needs to have a nuclear arsenal.