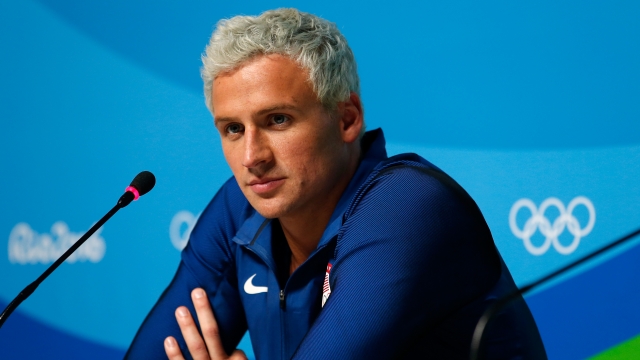 The swimmer issued an apology after Brazilian authorities questioned his account of an armed robbery.

"My philosophy is if you're a man at night, you've got to be a man in the morning. So if I go out all night and I'm dancing or I'm drinking, you know what, I still have a job to do, I still have a goal to do, and that's the 2016 Olympics," Lochte said to WTXF.

That was Lochte in 2014. And staying true to his philosophy at the 2016 Olympics in Rio, Lochte was a man at night, mostly vandalizing a gas station bathroom, according to local police. But he finally came to his senses Friday morning and issued an apology for instigating an international incident based around his stories of armed robbery.

Ryan Lochte posted this to note to Instagram: "I want to apologize for my behavior last weekend -- for not being more careful and candid in how I described the events that early morning."

SEE MORE: What The Hell Really Happened To Ryan Lochte And His Teammates In Rio?

But it looks like Lochte got caught being not-so-candid on camera. Here's how he initially described the events to NBC News:

"Then the guy pulled out his gun. He cocked it, put it to my forehead, and he said, 'Get down,' and I put my hands up. I was like, 'Whatever,'" Lochte said.

Whatever is right, Ryan. Police say and surveillance video shows that Lochte and friends went to a gas station after leaving a nightclub, urinated on the walls, broke some doors and mirrors and got back in their cab. Security got mad, approached the cab and demanded compensation — yes, with a gun. That was probably a little dramatic. But we're just getting started.

Police questioned Lochte's account from the start and launched an investigation. Authorities pulled U.S. swimmers Jack Conger and Gunnar Bentz off their plane, confiscated their passports and detained them for questioning. Police say they denied being victims of robbery and got to go home.

The other U.S. swimmer involved, Jimmy Feigen, donated $11,000 to a sports academy for kids in Brazil to get his passport back and get back to the U.S.

But ringleader Lochte didn't deal with any aftermath because he was already back in the states, nor did he retract his words that he was robbed at gunpoint. But it's all cool because Lochte said, "I accept responsibility for my role in this happening and have learned some valuable lessons."

Maybe the valuable lesson is don't be a drunk buffoon. And if you are, do what every college freshman had to do before you: admit and apologize, offer to replace what you broke and buy everyone breakfast in the cafeteria.