What Will The Korean Peace Talks Mean For US Troops In South Korea? 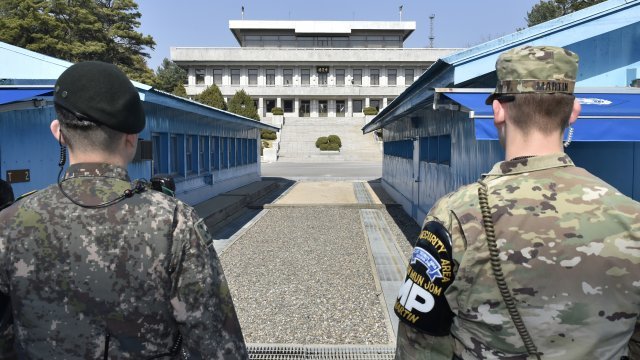 Almost 30,000 U.S. troops are stationed in South Korea to signify the U.S. commitment to the country.

South Korea currently hosts one of the largest U.S. military presences abroad. There are close to 30,000 U.S. troops stationed in the country, and U.S. bases take up nearly as many acres of land across South Korea.

But the future of that presence is kind of up in the air. North and South Korea are currently engaged in peace talks, and the North has traditionally viewed U.S. troops in the region as a roadblock to peace.

The current U.S. garrison makes up only a fraction of the North and South Korean active troops in the region. And ground forces aren't much of a threat next to the North's nuclear missiles and other weapons of mass destruction.

But many South Koreans value the U.S. presence as a symbolic commitment. Without U.S. soldiers on the front lines of the North-South conflict, the U.S. might be less motivated to protect South Korea.

Denuclearizing North Korea Will Take A Lot More Than A Handshake

North Korea's Kim Jong-un has committed to a nuke-free Korean Peninsula, but there's a long road ahead to actually implementing that pledge.

Security comes at a price, however. South Korea currently pays for around half the cost of hosting the U.S. presence, or $890 million this year.

President Trump has complained about the costs of keeping U.S. troops abroad and has reportedly mulled pulling out of South Korea or significantly reducing the U.S. presence there.