Here's Why The US Rejected The UN's Resolution On LGBTQ Rights 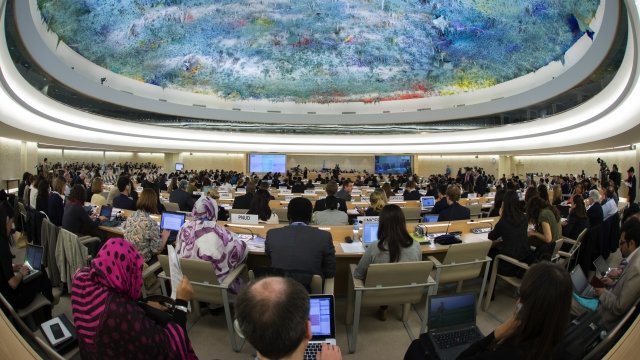 The United Nations Human Rights Council voted to condemn the use of the death penalty as punishment for same-sex relations. An international LGBTQ advocacy group described the decision as "historic," but not all countries voted "yes."

The United States was one of 13 countries to vote "no."

How Do United Nations Sanctions Work? And Are They Effective?

The U.S. is one of several countries that typically backs U.N. sanctions — but do those sanctions actually work?

Human rights advocates criticized the U.S.' vote, and former U.S. Ambassador to the U.N. Susan Rice tweeted: "I was proud to lead U.S. efforts at UN to protect LGBTQ people, back in the day when America stood for human rights for all."

"We voted against that resolution because of broader concerns with the resolution's approach in condemning the death penalty," said State Department spokesperson Heather Nauert.

BuzzFeed reports the U.S. has never supported any U.N. measure that condemns the death penalty.

In 2014, then-Ambassador Keith Harper abstained from a similar resolution and wrote: "International law does not prohibit capital punishment when imposed and carried out in a manner that is consistent with a state’s international obligations."