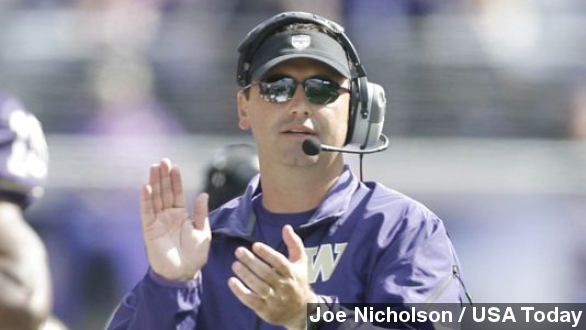 Out with Lane Kiffin, move over Ed Orgeron, Washington's Steve Sarkisian is taking over as USC head coach.

Multiple outlets are reporting Washington Huskies head coach Steve Sarkisian has been tapped as the new head coach at the University of Southern California. Sarkisian's Huskies are 8-4 this year, while the Trojans are 9-4. (Via KIRO)

Sarkisian first worked at USC in 2005 as a quarterbacks coach, before being promoted to offensive coordinator in 2007. He accepted the head coaching job with Washington in 2009. (Via KABC)

Since then, the Orgeron-led Trojans have gone 6-2 and have posted a big win over then-fourth-ranked Stanford.

It was previously believed Orgeron, along with Vanderbilt's James Franklin and the Denver Broncos' Jack Del Rio, were leading candidates for the gig. Still, USC's three-touchdown loss to UCLA last week and Orgeron's 10-26 record as the head coach at Ole Miss were glaring issues to some analysts. (Via Fox Sports / Scout) (Via CBS)

USC did not qualify for the Pac-12 conference championship this year. Arizona State and Stanford will play in that game Saturday night.