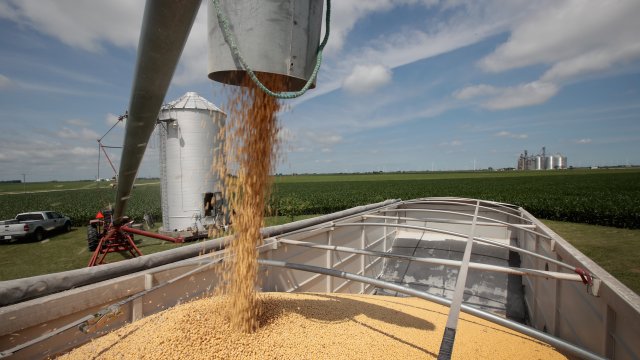 The payments will range between $15 and $150 per acre, depending on where the farm is located and this year's expected production.

The U.S. Department of Agriculture has unveiled a new aid program aimed at helping American farmers who have taken a hit in the trade war between the U.S. and China.

The $16 billion aid package is called the Market Facilitation Program, or MFP. The USDA will divide the money among farmers who produce certain commodity crops, like soybeans, corn or wheat.

The plan also covers hog and dairy farmers, as well as farms that grow one of 10 specialty crops, including cranberries and almonds.

The payments will range between $15 and $150 an acre, depending on where the farm is located and this year's expected production. The USDA will start making the first payments next month.

Farmers in the Mississippi Delta stand to benefit the most from the program, according to a Reuters analysis of the payment rates.

Last year, the USDA allocated about $12 billion in emergency aid to help farmers hurt by retaliatory tariffs from China.

President Donald Trump said trade talks with China were back on track after he met with China's president at the Group of 20 Summit in Japan last month. U.S. officials will head to China next week to continue those talks.