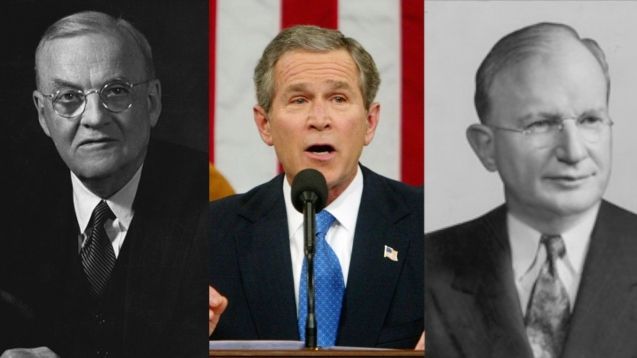 The president will leave an empty seat at his last SOTU for victims of gun violence, but he isn't the first to use the imagery to prove a point.

President Obama has announced one seat during his last State of the Union would be left empty to "honor the victims of gun violence," in a demonstration of his seriousness about his new executive action on gun control. (Video via The White House)

The empty seat is a powerful rhetorical image — and one that's been used by politicians since the 1920s to drive a political point home.

The last intentionally empty chair at the State of the Union was placed behind then-first lady Laura Bush's box during the 2003 address. The White House said it "symbolizes the empty place many Americans will always have at their tables and in their lives because of the attacks on Sept. 11, 2001." (Video via C-SPAN)

It's hard to find a better place for a president to make statements like President Obama will and Bush did than the State of the Union. Most eyes around the country are watching. (Video via C-SPAN, MSNBC)

Other chairs have been used in a more confrontational manner. According to Smithsonian Magazine, 1924 vice presidential nominee Burton K. Wheeler used an empty chair to fake-question President Calvin Coolidge. The magazine cites Wheeler's autobiography, in which he wrote: "I pulled a vacant chair and addressed it as though it had an occupant. 'President Coolidge,' I began, 'tell us where you stand on Prohibition.'"

Less than 30 years later, John Foster Dulles was running for a Senate seat and couldn't get his opponent to debate him face to face. So he started to travel with an empty chair as a prop, debating the chair.

But probably the most famous example happened in 2012 when Hollywood icon Clint Eastwood debated an empty chair that was supposed to represent President Obama at the Republican National Convention.

"I thought maybe it was an excuse. What do you mean shut up?" Eastwood said to laughter and applause in the convention center.

But with most Republican lawmakers who will be attending the State of the Union against any kind of gun control regulation, Obama's empty chair is making a much more directly confrontational statement than any of its predecessors.

This video includes images from Getty Images, Time, CIC777 / CC BY SA 3.0, and Library of Congress.