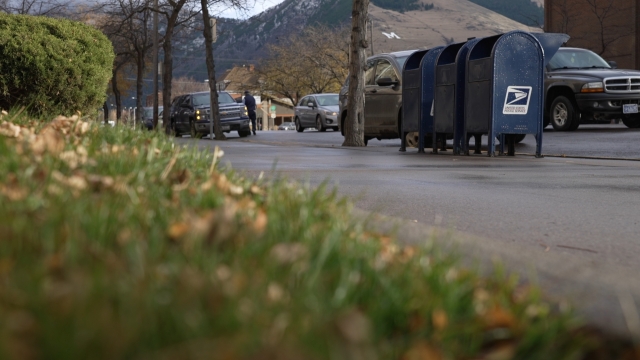 USPS policy says if a box receives fewer than 25 pieces of mail each day, it should be reviewed for removal or relocation, but Newsy found some gaps.

Tara Wantulok has worked at her family's Joe's Parkway Market in Bozeman, Montana, since the 1990s, and for years a blue United States Postal Service collection box stood out front.

"Just one day, I went out to go use it and it was gone," Wantulok said. "So it just disappeared, and I had no clue that it was being taken away."

It's the same story across the street from the market in front of a mail facility at Montana State University. Remnants of protest signs that read "Save the USPS" are still visible where a box stood.

You'll find the same void in the concrete across town in front of the Gallatin County administrative building, which houses the treasurer, motor vehicle department and elections office, to name a few.

"I mean why? Why would It be taken?" asked Gallatin County Treasurer Jennifer Blossom. "Why all of a sudden is it just gone?"

These Bozeman collection boxes vanished months before a large majority of the state would vote by mail in the 2020 election.

"It's secure," Gallatin County Election Administrator Eric Semerad said. "And that's why it makes a good place to deposit your ballots."

A postal carrier in Bozeman reached out to Newsy earlier this year, saying the boxes should be put back. Democratic Sen. Jon Tester of Montana agrees. He first sounded the alarm on reported box removals in 2020, and wrote a letter in October to U.S. Postmaster General Louis DeJoy requesting four Bozeman boxes be reinstalled.

"All people want is they want dependable mail service — that's it,"Tester said. "And make it as user-friendly as you possibly can."

Representatives with the postal service say removing boxes that routinely handle small amounts of mail saves them money. Since 2012, USPS data shows more than 29,000 boxes have been removed nationwide. They use density tests to measure how much mail goes through a box — basically, a fancy way of saying they count the mail.

USPS policy says if a box receives fewer than 25 pieces of mail each day, it should be reviewed for removal or relocation. There are some exceptions.

"Boxes adjacent to senior citizen housing, municipal and judicial buildings, and other public facilities are examples of the types of boxes that may be left in place even if fewer than 25 pieces per day are generated. Before removing a collection point, it must be considered for relocation within the neighborhood," the USPS Postal Operations manual states.

The USPS put the policy on hold until after the 2020 election following news stories about the removals.

Data obtained through a Freedom of Information Act request resulted in some new questions, showing many gaps in the process. The box in front of Wantulok's market, for example, sits on a busy intersection across from a college campus, but it's unknown how much mail went through it in 2019 and 2020 because USPS data shows no density test was done.

Out of 46 collection boxes on the list of 2020 Montana removals, only two show density tests completed.

Newsy found the same trend in other pockets of the country. In Minnesota, not one of the 33 boxes taken in 2020 underwent full density tests during the two years prior. It was the same for all 20 boxes the USPS removed in South Dakota that year. And there were major gaps in New York, Pennsylvania and Virginia. Metropolitan areas such as Los Angeles, San Francisco and Austin, Texas, also showed missing density tests in 2019 and 2020 even though boxes were removed.

"It wasn't until you had asked about the issues that revolve around density that we were able to get that density information," Tester said of earlier work by this reporter to get the data. "They weren’t going to give it. We told them it was FOIAed through the Freedom of Information Act, then they presented it."

"Why would you eliminate that extra service without testing at all to see whether or not it should go?" Blossom asked. "And then just to have it disappear."

You can find address lines laced throughout the USPS data report that show zeros for density test dates in 2019 and 2020, and every one we looked up belongs to a collection box that was removed from in front of a post office.

Newsy went back to the USPS asking why. Its response hasn't changed from 2020, when it said "the installation and removal of the Postal Service's iconic blue collection mail boxes from streets across the country has been based on mail volume received in those boxes."

When pushed on specific questions about the gaps in the density test data, a spokesperson said, "Unfortunately, I have already given you all the information I am able to provide."

The USPS density test policy says if a box will be removed or relocated, customers need to be notified 30 days prior. That didn't happen at the Bozeman locations Newsy visited.

"I do have a postal carrier that comes in daily and I remember when it first happened, I asked them what happened. She said, 'I had no clue it was even gone,'" Wantulok said.

"I think you've really hit on something that goes to a broader national issue here," said Paul Steidler, a postal service expert with the Lexington Institute, a public policy think tank. "And that is that first-class mail service is continuing to slow down."

Tester's office says they are still waiting for a response from the USPS to his latest letter to DeJoy.