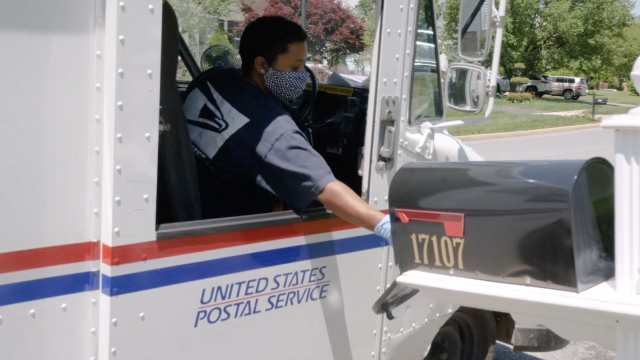 Newsy's investigative team takes a deeper look at the Postal Service board, six Trump appointees with power to restore confidence in mail-in voting.

Inexperience and a lack of members are two ill-timed realities of the current U.S. Postal Service Board of Governors, the little-known oversight group with power to shape strategy for preventing trouble with mail-in ballots.

“It’s not the situation any of us would like to be in, where we are,” said Michael Plunkett, president and CEO of PostCom, the Association for Postal Commerce.

Four of the 11 seats on the board are unfilled.

Vacancies have been a problem for a decade.

In 2016, after presidential nominations to the board kept stalling in the U.S. Senate, the number of members dwindled to zero.

With the White House and Senate leadership in the same party’s hands, President Trump succeeded in appointing six governors.

Postmaster General Louis DeJoy, hired by the board, serves as its seventh member.

They’re all men with backgrounds in industries such as business, health and transportation, but not the mail.

“Although I do not yet have an in-depth of the Postal Service, I’m anxious to learn as much as possible,” William Zollars told senators during his confirmation hearing June 3.

Zollars got the job.

He and all of the other USPS governors except one are new, serving a year or less.

They’re taking the wheel of a struggling Postal Service with limited understanding of how it actually works.

As for their politics, board chairman Robert Duncan is a major GOP donor who once ran the Republican National committee.

There is a requirement that no more than five members be from one political party. At least two of seven governors are on record supporting Democrats.

Donald Lee Moak has contributed to now-Democratic presidential nominee Joe Biden as well as other Democrats, according to campaign finance reports.

“The public should have a lot of confidence in these governors,” said Paul Steidler, senior fellow at the Lexington Institute, a conservative-leaning think tank. “These governors are successful executives. Their reputations are at stake.”

None of the governors responded to our request for an interview about what they’re doing to ensure mass voting by mail will work, even as President Trump campaigns against it.

Moak posted to his website that he has received thousands of emails from concerned citizens.

“We are working hard to ensure accountability,” the statement says. “The USPS’ mandate is massive, and the stakes of our election are high.”