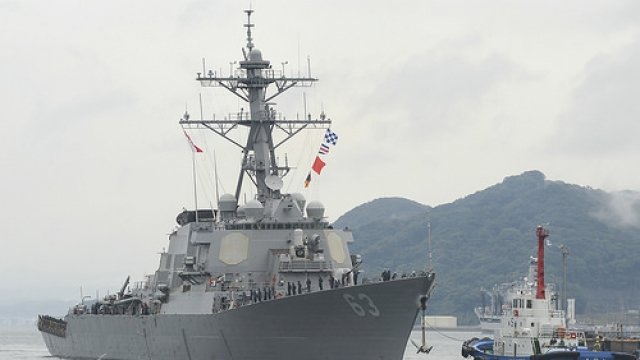 The USS Stethem reportedly sailed near Triton Island in the South China Sea on Sunday. China claims the island as its own.

Fox News was the first to report the USS Stethem sailed near Triton Island on Sunday. China claims the island as its own and thus the waters surrounding it.

In April, the Navy announced that the destroyer was conducting operations in the South China Sea. On Sunday, a military spokesman wouldn't confirm the ship's route, only saying it routinely conducts freedom-of-navigation operations.

China's foreign ministry, on the other hand, said the U.S. "deliberately stirs up trouble" and that Sunday's operation "constitutes a serious political and military provacation."

The White House said the two talked about North Korea's missile program. But a Chinese-state media outlet reported they talked about the countries' relationship. Xi reportedly told Trump the U.S.-China relationship is better but that there are "some negative factors" affecting it.

Some recent factors might include the U.S. announcing plans to sell a military arms package worth $1.4 billion to Taiwan and proposed sanctions against a Chinese bank with ties to North Korea.

Also within the past week, the State Department singled out China for being one of the worst offenders of human trafficking in the world.