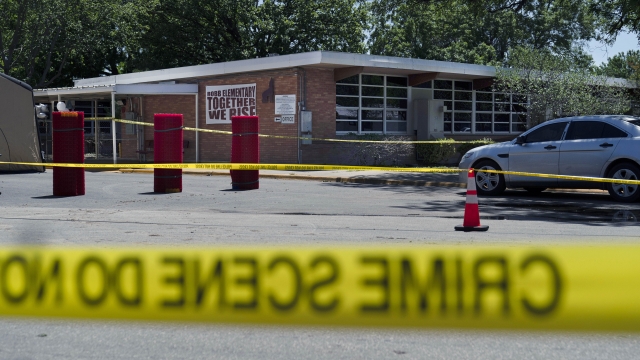 Uvalde Mayor Don McLaughlin said Robb Elementary, the site of the Texas school shooting that left 21 dead, will be demolished.

The mayor held a special city council meeting, followed by a press conference on Tuesday, where Newsy's Adi Guajardo asked him what the future of the building would be.

"You can never ask a child to go back, or a teacher to go back in that school ever," the mayor responded when saying the school will be taken down.

When Guajardo asked Javier Cazares, the father of victim Jackie Cazares, what he would like to see happen, the father agreed.

“I would like it for to be demolished, Cazares said. "I don't want to go back there."

Uvalde Mayor Don McLaughlin says Robb Elementary, the site of the school shooting that left 21 dead, will be demolished: “You can never ask a child to go back, or a teacher to go back in that school ever." pic.twitter.com/0vzt3CFzAi

The meeting comes nearly a month after an 18-year-old gunman opened fire at Robb Elementary on May 24, slaughtering teachers and students, and prompting outrage over lax response from police.

"The anger gets worse and worse every day," said Berlinda Arreola, who lost her granddaughter in the shooting.

Families of victims continue to gather at meetings, calling for accountability from police and city leadership, with many pleading for the removal of Police Chief Pete Arredondo form his post.

"Everyone needs to be held accountable — Pete for his inaction, every other officer who didn't do a damn thing, and all of you, for standing idly by while we hurt, [and] beg for justice," said Brett Cross, whose son lost his life in the shooting.

Texas top cop testified before lawmakers and said the Uvalde police chief's response "set our profession back a decade."

The head of the Texas Department of Public Safety, Col. Steve McCraw, had also blasted the response of law enforcement during the shooting.

"There's compelling evidence that the law enforcement response to the attack at Robb Elementary was an abject failure and antithetical to everything we've learned over the last two decades since the Columbine massacre," he said.

But at a press conference following those comments, the city's mayor slammed McCraw and Texas state agencies leading an investigation into the shooting for keeping him in the dark.

"Col. McCraw has an agenda and it’s not to present a full report on what happened and to give factual answers to the families of this communities," McLaughlin said.

Newsy has reached out to the Texas Department of Public Safety for comment regarding the mayor's accusations against McCraw.