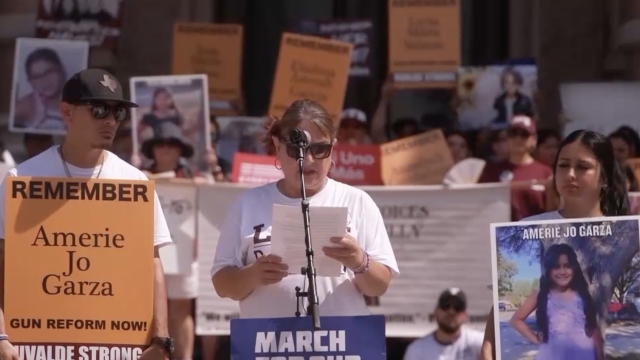 Family members of Robb Elementary shooting victims say they’ve met with the governor personally and specifically asked him about changing the laws.

Determined Uvalde families gathered in Austin, Texas, the seat of power in the Lone Star State, with one big ask for its governor.

“we’re demanding you immediately call a special session to raise the age limit to 21 by the way that should have been done three months ago,” said Berlinda Arreola, the grandmother of a Uvalde shooting victim.

They want a special session of the Texas legislature called to address gun violence; namely, to raise the age limit for high velocity rifle purchases to 21.

“it’s time to set aside politics and act,” said Javier Cazares, the father of a Uvalde shooting victim.

The gunman who shot and killed 19 Robb Elementary School children and two of their teachers on May 24th, was 18, and legally purchased two rifles.

Hundreds joined the families – the rally coordinated by the group March For Our Lives – brought survivors and parents of victims in other mass school shootings together, like the Santa Fe High School shooting, in Texas.

“We are standing with Uvalde, and we are mad at Greg Abbott and are asking him to raise the ***damn age,” said Rhonda Hart, a mother of a Santa Fe Shooting victim.

“We need to raise the age, that would be a good first step,” said Patricia Oliver, the mother of Parkland, Florida shooting victim.

And the Oxford High School shooting, in Michigan.

Mass Killings Have Claimed The Lives Of Nearly 3,000 People Since 2006

Data shows that most mass killers are men. Meanwhile, victims are nearly equal between men and women.

Family members of Robb Elementary shooting victims say they’ve met with the governor personally and specifically asked him about changing the laws.

“He appeared to look like he was listening, but he wasn’t absorbing any of the information. He was there to make an appearance,” said Ana Rodriguez, the mother of Maite Rodriguez.

“He himself, told me I had a powerful voice. And then I told him, 'I hope it’s powerful enough for you to LISTEN and not just hear what we’re saying',” said Berlinda Arreola, the grandmother of Amerie Jo Garza.

As much as they hope the public pressure campaign to get Texas lawmakers back to work will work, they also believe with the governor up for reelection, that the ballot box may be their other best hope for change.

“Yes, we’re demanding it and we’re gonna make sure we get this done, but if we don’t, we know what we have to do,” said Brett Cross, the father of a Uvalde shooting victim.

Newsy asked the governor’s office if Gov. Abbott would listen to the families’ calls and open a special session of the legislature, but as of Saturday evening, Newsy has not received a response.