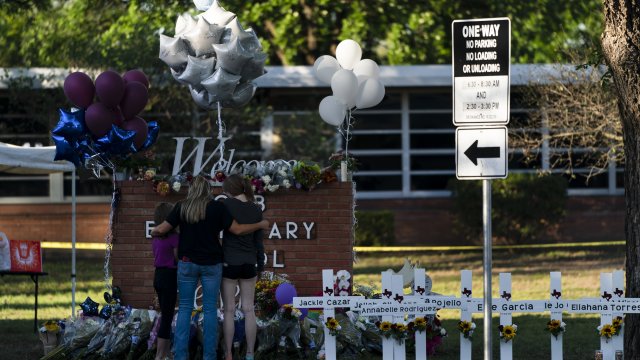 Newsy's Chance Seales breaks down how law enforcement responded to the Robb Elementary shooting and what the community is asking.

In Uvalde, Texas, you're liable to hear two things, sometimes in the same breath.

At Robb Elementary, police followed the active shooter plan, but also, could they have done more to stop a mass murderer?

"He walked in unobstructed initially," Texas Department of Public Safety Director Victor Escalon said. "So from the grandmother's house to the bar ditch, to the school, into the school, he was not confronted by anybody — to clear the record on that. Four minutes later, law enforcement are coming in to solve this problem."

Jose Cazares is the uncle of 10-year-old Jackie who died in the attack.

As police held parents back, his brother was one of the frantic family members willing to risk their own lives to save their children. While standing there, he could hear shots going off inside.

"My brother's a veteran. He served for a little while, so he knows how to handle himself with a weapon. He knows. And for him to see that going on, knowing his child is in there and the police are just standing there doing nothing, he's like 'Let me go in there.' And they kept holding him back. He said, 'If you want to arrest me, arrest me. But do something,'" Cazares said.

NEWSY'S CHANCE SEALES: We've heard that the school resource officer engaged with the shooter. It has not been clarified what exactly that means. Do families feel like they're getting enough transparency from officials here?

JOSE CAZARES: No. I used to live here. Yeah, I went to school here, you know. I live far away and I know that there isn't transparency here.

Many here feel torn. They know the police and deputies who rushed in because they all grew up together.

"Initially there was information — there was preliminary reports that as far as engagement, there was an encounter between him and the shooter at some point but there was gunfire exchange. But right now, we're trying to corroborate that information," said Texas Department of Public Safety Spokesman Lt. Chris Olivarez.

A few questions come up in conversations struck up at the town plaza or gas stations: Why was the school's back door unlocked? Families were told that a work order was filed but that it was never finished. Why didn't authorities fight their way into the room faster?

"Where Robb is located, by the time the cops got there, I feel like they did all they could. Because, I mean, it does take a little while to get to the school. I feel like, yes, they could have done more. Like, hearing about the officer off duty, that's the one that got the shooter — I feel like why didn't the cops on duty do anything about that," said Alexandra Garcia, whose distant cousins died in the attack.

"I don't know how much time  the school officer had. I mean we can say, 'Why didn't he just take him out before he went in?' But maybe he'd only have seconds. We don't know," said Uvalde resident Bryan Milles.

Johnny Martinez was on the town square getting a haircut with his first-grade son Carter on Thursday. They stopped by to pay their respects. And as a dad, Martinez still has serious questions about his city's response.

"I know I'm not satisfied yet with the answers they gave. I went to the conference yesterday with Abbott and I learned things there that I hadn't heard before. I didn't know that there were already police officers inside the school and they said that they actually engaged with him as soon as he entered. So if that were true, then I don't understand why he was even able to walk into a classroom. I would've thought that they could've apprehended him or killed him on the spot," he said.

One mother told Newsy her daughter will never step foot into another public school again.

Still, others can't stop thinking about that day … the desperation ...

"I was standing in my house freaking out, stomping my feet and jumping up and down and saying, 'I gotta do something.' And my husband was like, 'Just let the cops do their job. They're there and they're going to do their job.' But I felt helpless, you know what I mean? I felt helpless because I know how these things end. They don't end well. No one gets away free, you know, almost no one. I don't know anyone in that situation that gets out scot-free," one student's mother said.

Twenty-one souls never left that fourth-grade classroom alive. Now, Uvalde waits for answers, united by its grief and determined to come back stronger and safer.