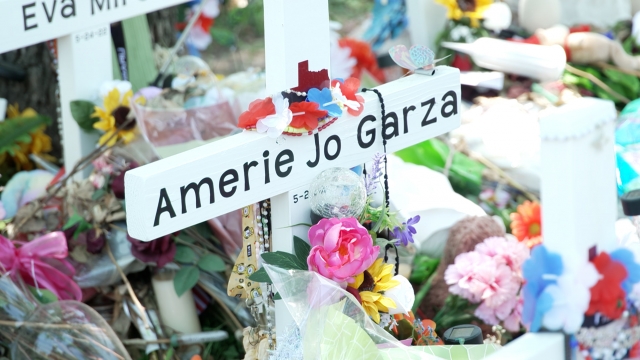 Two weeks ago, Amerie Jo Garza was a happy fourth grader at Robb Elementary. An ardent Girl Scout full of excitement, dreaming of summer and of one day becoming an art teacher.

One week ago the Uvalde community laid her to rest. And Tuesday, her parents are honoring the vibrant 10-year-old they loved so much.

"She loved to play with things that made a mess: Playdough, kinetic sand, she loved to make a mess," her father Alfred Garza III said. "She had a real strong personality and didn't deserve this. And none of the kids did."

Garza went to the City Council looking for answers. What he heard was deflection.

"The answer would have to come from the school board," Uvalde Mayor Don McLaughlin said.

The council referred any questions about the role of School Police Chief Pete Arrendondo to the school board. Their next meeting isn't until June 20 and Garza is frustrated.

"My main priority is to honor my daughter's name — that's not gonna change — and be an advocate for change," he said.

One notable absence from Tuesday's emergency hearing was Arredondo himself, who besides being school district police chief, also sits on the council.

The mayor says he and Arredondo haven't spoken in more than a week. He also expressed frustration into the investigation into the deadliest mass school shooting since Sandy Hook Elementary.

"Well we were told one thing one day and the next day the narrative changed," McLaughlin said. "We were told for a week the teacher propped a door open with a rock and at the end of the week that story was gone too. We want facts and answers just like everybody else."

Arredondo didn't show up. Garza did — and promises to keep showing up until he gets answers to how his daughter died, and why police outside allowed it to happen.

Garza also says the school district should shut down its summer school session, adding his step son is too traumatized by the events of May 24 to constructively learn.

"They have no business being a classroom right now. They need to be with families," Garza continued. "Even our step son has a hard time accepting this information and accepting death. Children don't know how to process that."