How One Community Is Vaccinating The Homeless 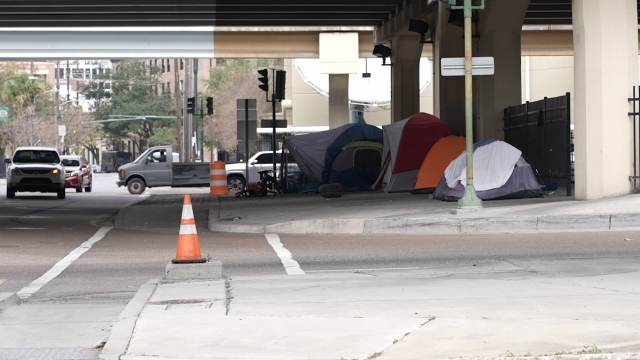 Austin Badon and Ruston Henry teamed up to bring vaccines to homeless people.

Alongside a busy New Orleans freeway, this is where some men and women spend their days and nights.These have always been rough streets for them, but now the pandemic has made those streets potentially deadly. And the rollout of vaccines in society has left them behind. The former Louisiana legislator Austin Badon didn't turn the other way when he looked out his car window one day — peering over at a group of people under the bridge."I was just driving by one day and, you know, I saw the tents and I saw the people and it just clicked in my mind, like in my mind, like, who's taking care of these people, who's giving them vaccinations?" Badon asked.Sydney Cox was more than happy to show us his recently acquired vaccination card.Cox says he grew up in New Orleans and it shows. He talked about going to high school there."I was the quarterback my senior year," Cox said.But medical issues later in life benched this former veteran turned construction worker."I had to learn to walk again," Cox said. "My former life was gone. 69 back, I remember, flashes of it."With Omicron and other variants popping up Cox was eager to get a COVID shot because he believes: "The shot is medical to prevent a disease that can kill ya and my health ain't real good now," Cox said. "So I got a shot. I don't want to get no sicker than I am."Badon says he did some research and discovered there were no programs to give vaccinations to this particular group. And he wanted to tend to that need. "I mean, people were feeding them, but nobody was giving them shots," Badon said.So he teamed up with long-time pharmacist and friend Ruston Henry who owns a local pharmacy.  Together they decided to take the Moderna vaccine straight to the people. It's a scary proposition at the time since Badon admits he didn't really think the idea would go over so well."I was a little bit leery about it," he said. "I didn't think people would come out and do it."But they came, and came, and before they knew it: "At one point we had a line of the homeless people who were here getting shots," Badon said.   "So we vaccinated close to 300 people," Ruston said. "And if I can keep somebody else from getting sick by getting my inoculation, I'll do it," Cox said. Another challenge: how to get recipients to come back a second time."So every four weeks we were back at the same location," Ruston said. "So people are looking for us more or less. We didn't get off schedule enough. We're doing vaccinations on this closing and we will be back four weeks to the next Thursday.""I didn't think they were coming back," Badon said. "You know, it was amazing. I remember there. I remember their faces. They were coming back to get their second shot."The National Alliance to end homelessness says America had over 500,000 people going through homelessness in 2020. The CDC says COVID-19 outbreaks have been reported in homeless shelters across the United States.New Orleans doctor and medical expert Corey Hebert says they may be overlooked and forgotten, but camps like these are an important segment of every city due to the sheer number of people they come in contact with, including people within their own community. "The homeless population live in such close quarters that if they were to get TB, if they were to get COVID, if they were to get influenza, it would spread so quickly that a lot of them would probably die because they don't have the appropriate medical resources in New Orleans that they can get," Herbert said. "They come to your car or they're trying to get money or whatever. All these things that, you know, a lot of the homeless population may do a lot of their actions could spread COVID-19 to the population that is not homeless, and that could be an issue."Cox says he still has a lot of living to do, the shot helps him make sure he's not counted out and now he's ready for his booster.  "God's gift to me is life," Cox said. "What I do is life, my gift to God."