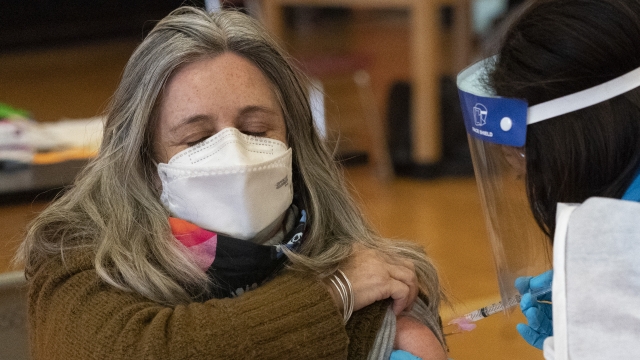 President Biden called for use of the Defense Production Act in order to expedite vaccine production as supply runs low across the country.

A year after the first confirmed COVID-19 case in the U.S., people are lining up to be vaccinated, some before dawn.

"I got here at 2:30 in the morning and I was number two in line," Randy Kraft, a New Jersey resident said at a vaccination center.

"You do your line, like everywhere you go; you have to do a line, wait for your turn," Gilma Madera, a New Jersey resident said.

The only problem? There aren't enough vaccines to go around.

"For lack of supply we are actually having to cancel appointments. We need more vaccines and we need it now," New York City Mayor Bill de Blasio said.

"I have friends that have had appointments canceled. I have an appointment for next week. I'm horrified," Carole, a New York City resident, said.

"Well we are in desperate need of vaccines, so that we can continue to take care of the pandemic that’s going on right now," Fitz, a New York City hospital worker said.

Across the country, health officials say getting people vaccinated has become tricky because they don't know just how many vaccines will be delivered from one week to the next. A problem some hope will be addressed quickly by President Joe Biden.

"I'm just hoping that they find a way since Biden now is president and they find some type of way to make it available to everyone you know," Marie Louis, a New York City resident, said.

"Our plea to the president: Give us the vaccines and we'll finish the job," Mayor André Sayegh of Paterson, New Jersey said.

The Biden administration's plans include having the federal government take the lead, including using the Defense Production Act to speed up vaccine manufacturing. The president is aiming to distribute 100 million doses of COVID-19 vaccines in his first 100 days in office. A promise, that if fulfilled, will be a welcome sight for the millions of Americans still waiting on their turn.

"I'm just hoping sooner, rather than later, we get more access to it," Grace, a New York City resident, said.